Avalanche Peak has to be one of the coolest running races around. From Arthur’s Pass you head straight up 1100 odd meters to the summit of Avalanche Peak, along the ridge to the Crow slide and down a wicked scree slope to the crow river,  from here is a river run on a scale similar to the Coast to Coast run before finishing by running along the river flats of the Waimak to the Bealey Hotel. After an enjoyable race last year I thought it would be worth a crack again…hoping I would be fitter and faster and hence a better race all around. I have been gradually winding that 5km time down but have been lacking a bit of long distance training of late so I wasnt feeling 100% confident in my ability to finish well. 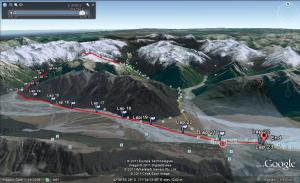 GPS Trail of my race at the Avalanche Peak Challenge 2011

The forecast was looking good early on in the week, but by Friday night a front was scheduled to go through around midday Saturday so I was thinking there was a good chance the alternate route could be used. Once we good up there it was clear that it was going to be a good day and the race was still on. The temperature was almost perfect, not too hot not too cold and a little bit of a breeze.

Grant Guise reluctantly bailed at the last minute deciding to freshen up for his wedding at 4pm that day rather than running about the hills, but Jacob Roberts was there as always along with rumours of a German Mountain running rep. So there was potential for a close race once again. I ended up into the lead going into the first corner after the short loop around the town, but handed it over to Jake fairly soon after that and positioned myself nicely into 2nd. I held onto 2nd up through the steep climb, right on the heels of Jake and 3rd place quickly fell of the back. I let Jake go just before the bush line and he went hard up to the top of the peak slightly faster than last year. I was about 1 and a half minutes faster than last year to the top and on a mission to catch Jake.

Once down off the top and along the ridge I settled into a good rhythm and managed to maintain the gap. At the top of the slide I could see him fairly clearly and when hard in a semi-controlled fall totaling 9mins from top to bottom. Jake was back within sight but managed to get away quite quickly into the Crow. I never found a good track to run in in the top part of the crow and with the river terraces gone finding the track was a bit difficult. I passed 4th, 3rd and 2nd in the Women’s race here (they start 30mins prior to the men) And could just see jake in the distance….but he was getting away.

Through the lower part of the Crow I started to feel a bit crap, so I quickly got into some food. I was quite keen on a banana but didn’t have any…so Leppin part of a muesli bar and some fruit bursts had to do instead. I assume this is where the majority of the time got put on me by Jake. I managed to pull through the bad period although I was starting to develop a little bit of the stitch which quickly went away after I hit the riverbed.

No one was in site on the river bed, just second and first place trampers (they start 1 hour before) I didn’t want to look around and I was totally focused on getting back as fast as I could. Every time you crossed the freezing cold river it was a refreshing shock and it took a good ten steps for the legs to get back into a good rhythm. A warm Northerly head wind had picked up but this stage in the day which did make it a little tougher….

Klondyke corner eventually came into sight and after a long time I managed to get close to it! I cut high to the left into the semi permanent river terraces there for some better running. The bridge seemed to take an age to get too, I could see it a long way back but it seemed to get further and further away the closer I got!. Finally I reached the bridge and allowed myself a look back to check on third place. No one in sight. Phew…

The next 5mins were a battle with the clock trying to get in as fast as possible…so I could end the pain! It was a really cool feeling to turn up the hill to the finish knowing what you had just achieved but this was quickly put to the back of the mind like a smack in the face with a dirty steep grassy hill to finish with. The calf muscles began to cramp with every step after so long thrashing them along the river flats. It was hard work but with one last grunt up the hill and into the finish tent I was complete. Being a nice sunny day again it was good to sit on the grass and chill out in the satisfaction of finishing such a cool race. Third place was 6 minutes back on me and I was about 3 seconds faster than last year! 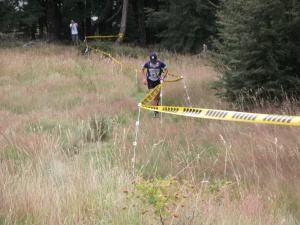 Up the Finish Chute

After a massage on the house for coming in second place and refreshing dip in the river at Arthur’s Pass we headed back to the Bealey hotel to see the rest of the competitors come in followed by the prize giving. I picked up some Asics shoes to the value of $250  for my 2nd place and another hat for the collection. Got more than my entry fee back in prizes which is always a bonus apart from the satisfaction of completing a cool race. It’s definately worth a crack sometime and on again this time next year, a week after the Coast to Coast.