I have been avoiding a write up on the Nationals this year… Mainly because I was a bit disappointed with my results. I went into Nationals with every intention on winning one of the races. and came away with  3rd, 5th and a 6th, plus a 2nd on first leg of the relay to go with it.

The sprint turned into a bit of a debacle and I was behind right from the get go really, making a mistake on the first control and never really hitting that top speed focus until the middle of the course. Once through the spectator area I pinned my ears back and smashed it around the remained of the course, unfortunately including a couple of 15-20 mistakes. There was an error with one of the controls and just about everyone on the course had trouble with it. After a protest the result was declared official and I headed up onto the podium to claim 3rd place. 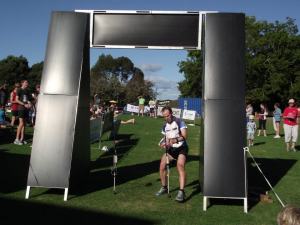 Finish of the sprint!

The long distance was my aim this year once again. I went out hard, well at least I thought hard.  I had an alright start except a dumb mistake on the 5th control where I dropped about 2mins. In my mind I was ok with that as I knew it wasn’t all over yet. Later in the course I started to suffer from the less than substantial meal from the night before, getting hungry and making silly slow mistakes, not really attacking the course hard. Through the spectator run through I managed to get some food on board and this dragged me through the remaining controls at a steady rate. I was hugely disappointed afterwards, to the point of being quite depressed. I felt physically awful and my stomach was not much better. I was 7mins behind Tom the winner, but surprised I was still right up there in the thick of the results and not too far back in 5th place.

The middle distance I felt only a little bit better than after the long race. I had not motivation early on and bumbled about before about halfway through the course decided to kick my orienteering into gear, increased the running speed and made my way back up the finish order. Near the end I lost 1min through being completely stupid and switching off for a moment too early. End of the day I was sitting in 6th place. Not as dissapointed as the long day but still not happy. 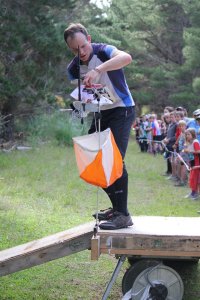 Punching the spectator control at the Relay

The relay was some sort of redemption and I took the sit back and wait approach early on before coming through the pack to join the leaders. I got into a good group with Tom and Matt and we blasted around the last little loop fighting hard until the end….Tom taking out the prestigious honour of being the first back on 1st leg and me slotting into 2nd place 3 seconds behind. Our second leg runner had a bit of a mare of the run, But Carsten smoked around the course, dragging up back up to 4th place…unfortunately not enough to get our trophy back…

All in all a solid weekend, of good, but not great orienteering. Could have done better… B-