GODZone – “where the mountains meet the sea” – Day 6

Getting onto the bikes onto the final section of the race was highly motivating, and I was keen to get the show on the road. We rode hard on the seal and finally together in a bunch again, which I really enjoyed as it felt like we were working together as one entity. There was a sharp turn on the road before a steep climb to get into Gore Bay where that team like focus crumbled pretty quickly. Dave who was having trouble with his gears the whole way had another malfunction and had to stop to fix it. I will put my hand up here and take responsibility for not stopping to help, it was poor team work on my behalf. Amy was under tow behind Nathan so they continued and I figured Dave would fix his problems pretty quickly, but near the top of the hill I realised Dave was still way behind and I slowed up. Nathan went to the top of the hill and then turned around to collect Dave, which he was a bit annoyed about so I went down with him and helped to collect Dave. Heading back up the hill Dave and I had it out and once we were back together with Amy, Nathan had to exercise some leadership and pulled us back into line.

The rest of the ride we worked really well together and maintained our position heading into the final trek. We all seemed in good spirits again heading up the hill, the same one Tim and I ran up in the World Rogaine Champs interestingly enough. It was good to have the map back and out doing some orienteering. It wasn’t too long before we had formed a huge pack, with Girls on top, Bivouac/Inov8 and Auckland Uni. The pack we formed was great, we were all chatting away pretending not to be in the hurt box, everything seemed fine, until we headed up another steep hill.

About 5mins up the hill Amy had an issue with her foot and it seemed fairly urgent for her to sort it out so we all stopped and waited as the other three teams headed up the hill and walked away from us. It was pretty heart-breaking to watch, but the team come first and after some re-distribution of gear we were on the move again. We kept the other teams in our sights for quite some time, which was pretty handy when watching them cross the Waiau river which was chest deep on me.

At the next checkpoint there was pretty much no sign of them, even when we hit the beach. It was a long walk down the beach and a good opportunity to get some food in. We got the final control on the beach just as the daylight disappeared for the 6th night. The final trek checkpoint wasn’t too far away, just 500m off the beach in a fairly tricky area which somehow I managed to nail. With the knowledge that there was a couple of other teams wandering around we stealthily clipped the control and made a hasty exit. I got a little confused on the exit and felt we had gone further than we actually had. Since getting dark I had forgotten to adjust my distance estimation and we came out of the steep gully way closer to the beach than I thought. Hence when we hit the riverbed we were surrounded by cliffs that didn’t make sense as to where we actually were. After wandering around for a while and not achieving anything Dave came up with a fairly good plan and it was clear my confidence had taken a knock and we followed that getting us out of a bit of a mess. 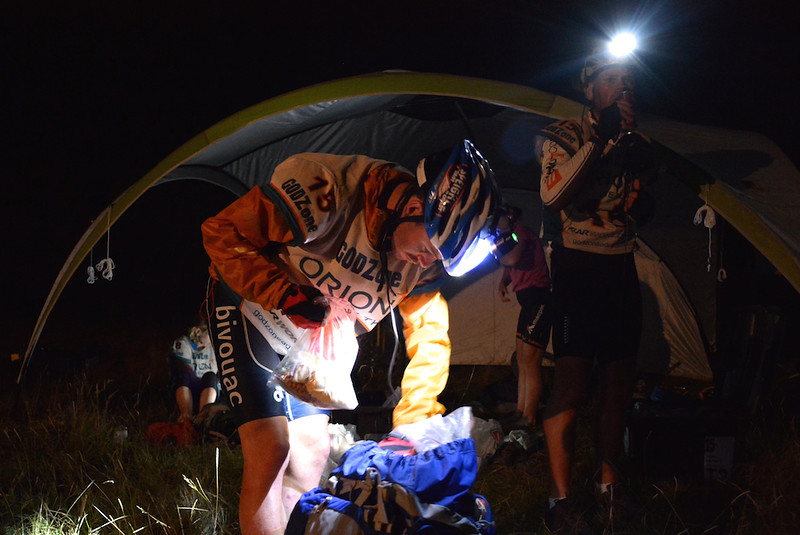 The urgency had definitely gone by the time we reached transition. Auckland Uni and Bivouac were long gone. We still had the jump on Girls on top and wanted to keep it that way. Back on the bikes I was starting to get tired again and needed some more No-doze to keep me awake. Dave went through a bad patch, and I ended up taking back the tent off him. Nathan was pushing himself to the limit or past the limit and Amy felt it was safest to unhook the tow line! Eventually we refueled and were all back in an semi-alert state as we headed into the farmland. Girls ontop soon caught up to us and we rode a fairly long section with them. The farm tracks were fairly hard to pick up in the night time as some were just vehicle tracks across a paddock. Amy dug deep through this section and Nathan again seemed to be in the hurt box while Dave and I managed to navigate ourselves away from Girls ontop. There was one final tough bike carry to get us to the top of the hill before it was all downhill with a few tricks before we hit the main road and headed to the final transition.

The final section along the road we fractured as a group again, Nathan was battling from pedal stoke to pedal stroke and I just wanted to get to the finish line. Nathan was in such a bad state that he needed a 20min sleep while we sorted ourselves out for a paddle in the dark to the finish. We were originally told we would have to wait for another team as the safety teams were a bit stretched at that point in time, but after some robust negotiation we were allowed to go by ourselves if we wanted. Girls ontop didn’t arrive long after us but we got onto the water and almost out of sight before they did.

The paddle started out fairly calm with not much swell, but as the sun came up the wind picked up a bit too. We rounded the second last check point as it got light and headed up the shoreline to the next and final one. We had a couple of dolphins come check us out but they were not going to hang around for too long in those sea conditions. It was a long boring paddle for quite sometime and I think Dave and I struggled with sleepiness while Amy and Nathan seemed to be ok in front. The swell kept building up to and around about 2-2.5m and some of the waves started to break, at which point the safety guys decided to divert us into South Bay and we had to trek around the headland to the finish. I was pretty happy to be out of the boat and on dry land for the last little bit, but there was no time for mucking around as we landed we were told that there was a team chasing us down.

As we headed out on the headland walk we spotted Girls ontop heading into the shore, so it was time to put the hammer down and would you believe it, after 5 and a half days on the go we were able to maintain a bit of a jog. After a while it was evident we still had enough of a lead on the chasers that we could revert back to a walk. There was plenty of time for reflection and Jimmy’s Pie visualisation as we wandered along the beach and finally we crossed the finish line 5days and 20hours later.

The Pie went down ridiculously fast, fast enough I was able to wangle another one from the race director 🙂 the same couldn’t be said about the beer unfortunately and that might just have ended up in the sink… I ended up a bit of a mess afterwards with a long list of injuries… Concussion, Cracked rib, several infected wounds, sprained wrist, numbness in my left hand, and Achilles tendonitis to go with the rest of the bruises and cuts! 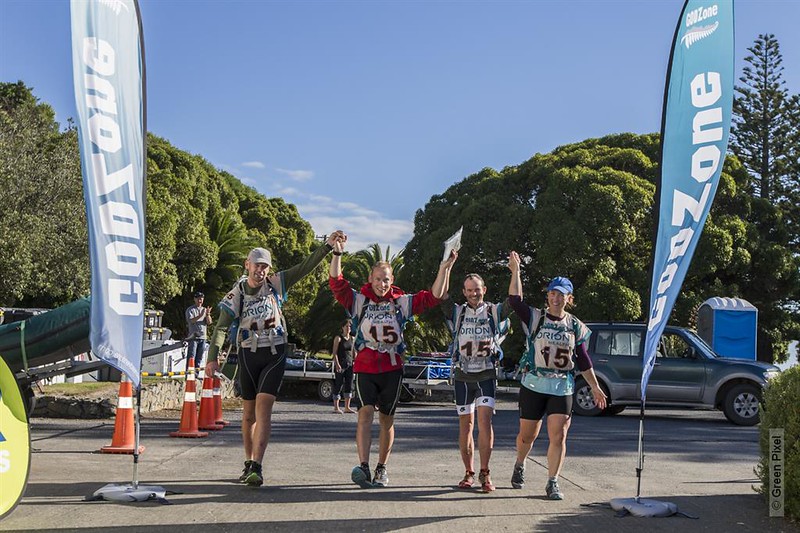 5 and bit days is a long time to spend racing together, we faced many challenges together, overcame all sorts of obstacles and achieved great things. We set out to finish the full course as a team goal which we achieved but I cant help but feel that we possibly didn’t race as hard as we could of. I could be expecting a bit much, and there is no doubt we all gave our best where we could but I think we all had the skills and a capability to do a little better. There were some key moments in the race where things didn’t go to plan, such as a navigation mistake on the first bike, me crashing my bike, Dave’s bike carrier, the debacle in the Hodder and the decision not to sleep in the Jollie Brook hut. There was a lot of mucking round and a lot of stopping also. Some of the teams around us (time and place-wise) I talked to afterwards had a lot more sleep than our 13 or so hours I reckon we would have wasted close to 12hours just for all the unnecessary stops along the way, and in some cases I wonder if maybe I could have done more to help out to speed this process up. A lot of these things I would put down to experience but the main thing I realised is that for you to work well as a team you need to communicate well and in a positive manner and you need to have the same goals. I know we were all there to complete the course but I know for sure I was there to compete also, and I am not sure that was the case for the entirety of our team.

So the eternal question… Would I do it again? Yep, no doubt I sure would 🙂