Quick turn around last week, home from Nationals on Monday night and of to Murchison on Friday Morning for the Absolute Wilderness 12hour Adventure race. I really enjoyed the Mystery Lakes 12 hour race last year, but with Hollie overseas and Mulvey pretty much retired, Hilary and I formed a skeleton team roping in Rob Munro to race with us a few weeks out.

Typically after a long week of wet weather in Christchurch the sun was shining and it was a warm morning spent packing….my favorite pass time….not. More long driving in holiday traffic wasn’t exactly fun but once we got a hold of the maps in Murchison all thoughts turned to the fun 12 or so hours we were going to enjoy the next day!

In the cool mist we gathered at the start line ready for the 10km Raft section to start with. In the raft was a guide and we shared a boat with another team. Unfortunately we hadn’t really thought too much about who to  team up with in the raft and ended up waiting a few seconds before a school team jumped in with us. It was quite a cool scene down at the river bed in the mist with all the boats making their way into the main flow. It was hard work paddling having not done any since the last 100km river trip… with my head down paddling hard I didn’t get the chance to really enjoy the paddle so much as I might have liked, but the few bits where we got to go through some big-ish rapids it was pretty fun. 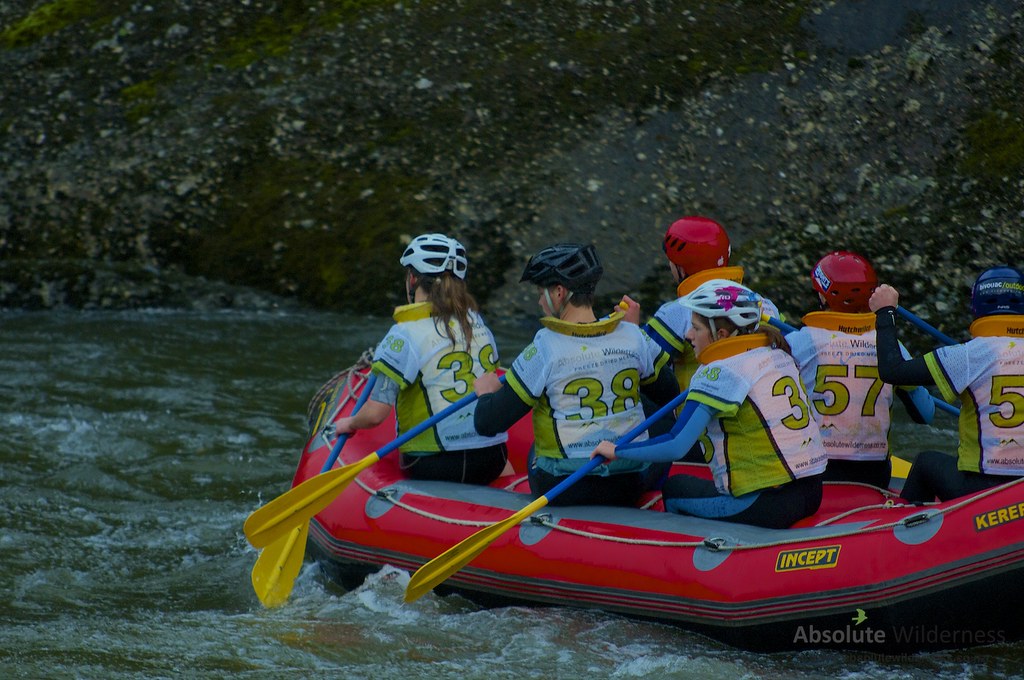 It was still fairly cool when we got out of the raft, not quite warm enough to take my wetsuit top off at least on the run up to the bikes. We found ourselves sitting back in around about 15th or so place out of the transition, but we quickly caught some teams up once off the road and onto a little bit of 4wd track. Back on the sealed road after collecting the control we set about catching some other teams. Heads down we powered on until we caught one team and it seemed at that point a huge bunch just formed out of nowhere. We rode in the bunch for a while then caught another team, where the speed slowed a little. I saw a gap on the left, took a glance behind at Hilary and Rob right behind, thought about going for it, then hesitated. Hilary spotted me hesitating and yelled out from behind “take them” and I thought to myself “ok then!” 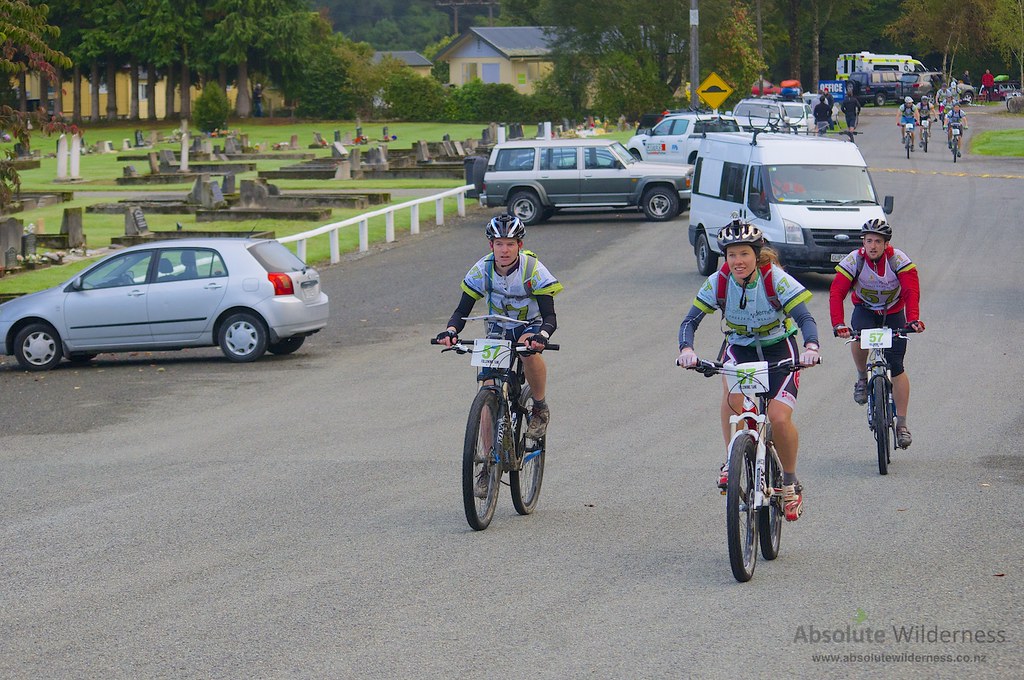 It wasn’t too long before we dropped that bunch and rode strongly into transition in good spirits. After some food out of transition Hilary was keen to run again so away we went up the river bed. Having done a fair amount of coast to coast training over the summer, moving across the rocks was second nature, we made good time and passed a few teams. At a critical point in the river bed the track went to the left into some trees up what looked like a tributary while the main branch kept going up. We hesitated, then worried doubled back before confidently moving up the correct stream bed. We saw a few teams already way up the wrong riverbed and once we were into the forest we lost touch with all those around us. Away from the competition the toll of moving quickly up the riverbed started to take hold on Rob and Hilary. We trucked on and solid as a rock arrived at the hut.

Having left in about 12th place we had worked our way into 5th place (our goal) much to our surprise. From the hut however it was straight up. It was a hard grind up the hill. The previously jovial team went into suffering mode, to their credit both Hilary and Rob although struggling pushed through it relying on me to do all the talking to keep spirits up.. it was tough work for us all! Once on the tops the mode lightened a bit and the amazing scenery took away from some of the focus on the physical pain. For all our efforts we ended up in a really good position and extended our lead over the following teams to the point where we were left on our own. Hilary made a decisive call on my indecision and our risk paid off, getting us to the transition and maintaining our placing.

Back on the bikes for the final leg it was looking like we were going to finish in the daylight. I got ahead of myself here and made a couple of critical errors on the navigation. I must have been slowing a bit on the bike too and I let Rob get ahead of me after the river crossing. We ended up traveling a bit further than we should have which resulted in a fairly extreme bush bash with our bikes. We lost around 40mins as I tried to bash a way through when we should have really headed back to the river bed and found another place to come up. Rob managed to remain calm while I got a little frustrated by it all. He got the control quickly and we started back on the road home. Team spirits got a bit down for a little bit here all around, Rob did a good job of keeping us moving by setting the pace out the front. A couple more checkpoints and a few licorice all-sorts later we we back up and going. 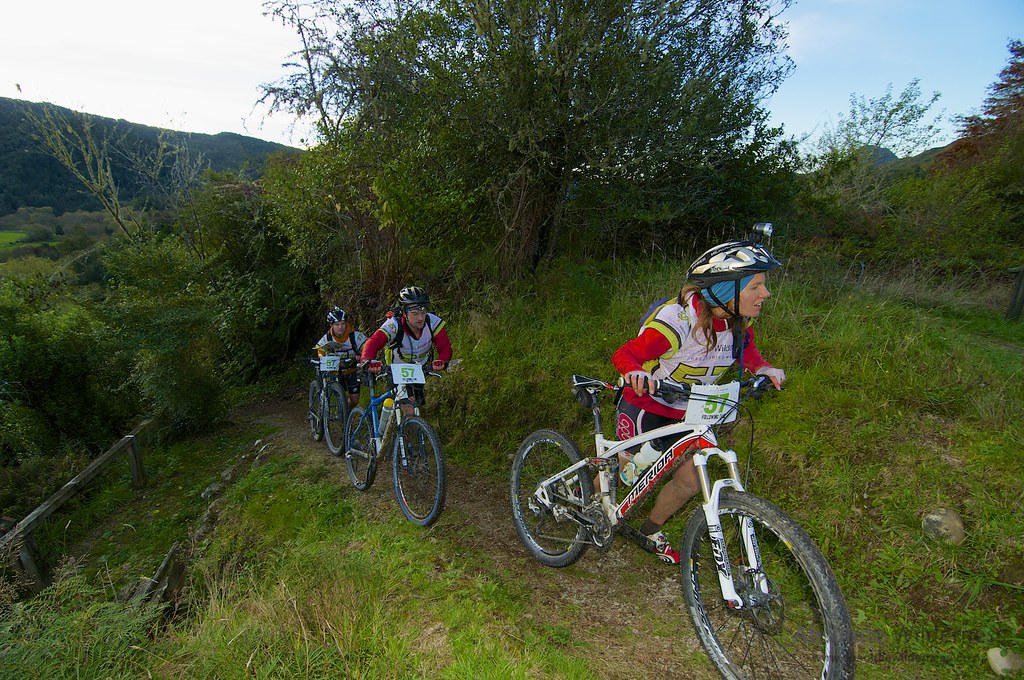 Two checkpoints near the end were just off the road on a bit of an out and back loop. We had thought that surely we had lost a place or two on the 40min bush bash and there might be other teams closing in behind us but nothing like seeing your competition on your way back out to the road to get the race mindset back! The last section on the road home was just dark enough to get the lights turned on, and we turned the pace on too. The two male teams behind us were maybe 15mins back and we wanted to stay in our rightful position ahead of them. So the pace went on, Hilary and Rob tucked in behind. Being all downhill into Murchison and the finish we managed to fly home and roll across the finish line just as the twilight turned to night time in just over 11 hours.

Across the finish line to our surprise we discovered we had maintained 5th place and only one all male team had beaten us. Results wise we were really happy with our position, we could have been a little faster on the last bike ride but not fast enough to gain another position. Brent’s team just smashed out the course in an almost unbelievable time, but those guys were aptly named Not Normal, so they were just a bunch of freaks really. I really enjoyed the race, had awesome weather for it, a really great all round team too. Apart from being a little bit short, it was a good race, not highly technical navigationally but we still needed to be on our game most of the time. Thoroughly enjoyable and if i can make it again next year I definitely will be back.