It was pretty last minute but with some encouragement I was entered and raring to go for the Bivouac Mt Isobel Challenge 2015! We had to get up ridiculously early to drive to Hanmer on Saturday morning (Not quite as ridiculous as the Routeburn) but for once we were greeted with some nice weather albeit a bit frosty at registration. It was equally if not colder at the bike transistion on Jacks pass but by the time the race start rolled on though it had heated up sufficiently that it wasnt all that bad once the down jacket was off!

Underway on the run, I quickly moved towards the front, the first two guys were going pretty strong straight up the hill and already reaching my sustainable pace, I wasn’t game to try and push myself to catch them. Soon enough Nick and Flavio moved on through and after a short while in the forest the others dropped back out of sight. Flavio was within reach, Nick however seemed to be gone right up until the Junction of the track. Sudden it was as through Nick and Flavio had switched places and I missed the passing manoeuvre completely. Nick had slowed quite a bit and I could even see him doing a bit of walking. Slowly it felt like I was gaining on the both of them, but much to my concern was the 4th place guy not too far behind me. After reaching the top I was feeling quite strong for a change and started to make up some ground. The technical traverse gave me a bit of an advantage surprisingly on Nick, who I actually passed. This gave me a boost right up until the end of the run where Nick came flying past me again. I chose not to go hard after him and relax a bit before the bike ride. 4th place however was pretty darn close behind me all of a sudden so I really had to work to get into transition a few seconds ahead.

At the bike transition Flavio was gone and well out of sight, myself, Nick and the other guy had the bike racks to ourselves… except me and the other guy were pretty much right next to each other. I had a pretty quick transition and was quickly on my bike in 2nd place. This didn’t last long and eventually while I was sitting up taking a drink Nick came flying past and neither myself of the other guy could hang onto him. I sort of just thought he might slow down a bit towards the end, but as it was I hardly saw him again until the finish line.

I battled it out up the hill with 4th place, and we switched positions a number of times until the downhill where he took off and I was a bit hesitant on some of the high speed gravel corners! Sadly I was not fast enough on the down and the flat tarseal and it wasn’t too long before George Lucas came flying past me, putting me back in 5th. I pushed hard on the following frosty up hills and gained 4th position back again. 3rd was clearly gone but I still had one glimer of hope towards the final traverse before the descent when I saw Nick and George not that far ahead on the track. I pushed as hard as I could up that last little bit but it was only just enough to maintain my position. I had what I thought was a fast descent down to the finish line where I finished comfortably in 4th. Luckily I hadn’t looked back as there was a 14yr old just behind me who after crossing the finish line was telling me he was hunting me down but he must have had a phenomenal ride to pull back a lot of time on me in the bike even though it seemed like I was bleeding time on the bike the whole time. 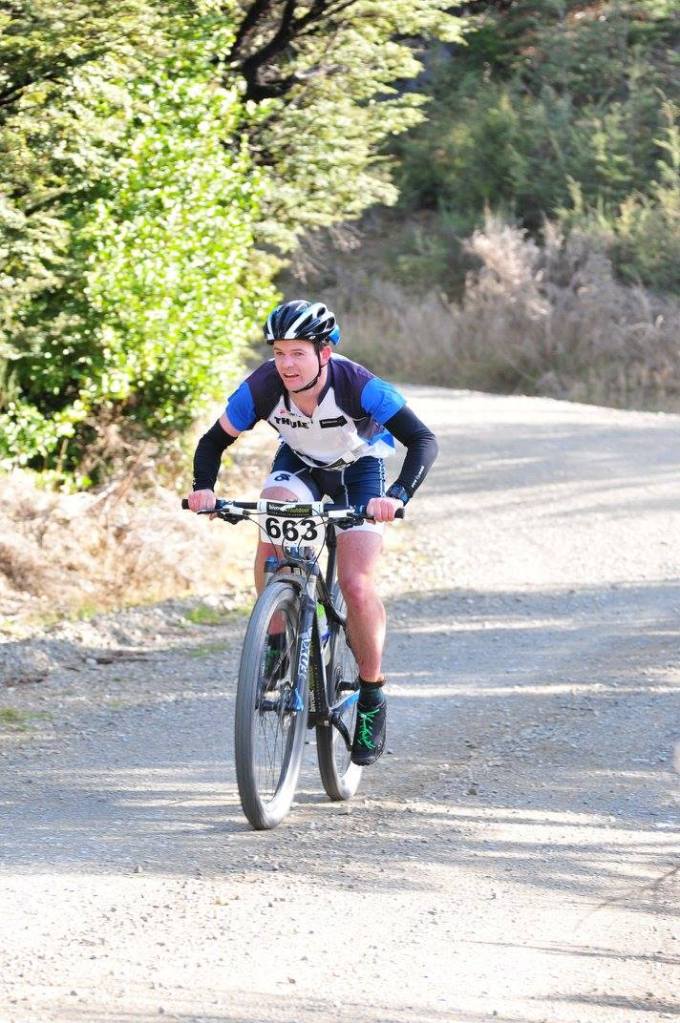 On the way to the Finish. (photo: St James Mountain Sports)

A quick check on the bike over the finish line revealed quite a bit of drag on my brake pads, and the back wheel wasn’t rotating quite as freely as I would have liked…oh well…I never really felt like it affected my performance all that much anyway. It was a bit annoying to get yet another 4th place but I was happy enough with how I raced, I enjoyed myself and I was satisfied that I gave it my best shot. I couldn’t ask for much more than that. Flavio had an awesome race to lead by such a large margin and Nick was outstanding, given he his riding ability was supposedly “questionable” going into the race. True class shines through after all I guess and George Lucas Also had a storming ride to pull back all of my advantage over him in the run. Anyway for me, its time to get some strength back in the legs, and clearly I need to work on some bike speed. The endurance is there, the pencil just needs some sharpening!