Smashing out the Luxmore Grunt

Earlier this year I was down in Te Anau for the Routeburn. I had grand designs of coming out of nowhere of the back of Godzone to win that race. I thought I had it sewn up…. but in reality I hadn’t had enough time since Godzone to recover properly, I hadn’t got the training in for it and the weather never really turned up on the day. This left me a nervous wreck before the start and consequently lead me down a path to what I felt (even though I was 4th) was a sub par performance.

After some months of recovery and some thought I focused in on the Luxmore Grunt. I think one day I would like to give the full Kepler a go…but Im not sure that that time has come yet! On closer inspection I found that the Grunt seemed to suite me really well, approx 27km, 1 climb ~800m and 1 descent, and being attached to the Kepler it has some prestige associated with it, something that outside of running circles is pretty rear. I was pretty determined to have a good showing and having come close to several of Phil Costley’s records in various races I set that as my target.

My preparation was less than ideal. Some months before the race, two people who had quite an influence on my running passed away in separate incidents. Hilary’s Dad, quite suddenly in an accident and Brian Buschl who died within a week of being diagnosed with Leukemia. This threw me a bit but then again in some ways I think it helped me to focus in on giving it my best for them.

When I woke up on race morning, I was relatively calm, a little bit nervous but most importantly confident, I knew I was ready, now it was just a matter to getting to the start line. Getting to the start line actually turned out to be a little more interesting than I would have liked. The bus either missed us on its pick up round, or never showed up… luckily an extra van rolled up around 15mins late.

I took my position in the centre at the front of the start line, alongside Kristian Day and last minute entry Grant Guise. From the start gun the three of us emerged in front quite easily. I found myself right at the front to begin with, and held back a bit cruising along at the pace of Grant and Kristian. this lasted for only a few seconds before I decided that this was not a pace that I was comfortable running at and took charge of the race. It felt like I put a little bit of distance on them almost immediately, then gradually I edged out a lead so that they were out of sight.

I was feeling pretty strong on the flat section, I am typically strong on the uphills so I felt it was just a matter of consistently pushing myself at a sustainable pace, a pace that if anyone was going to pass me then they were going to have to work for it. The gradient of the track allowed me to run all of the uphill section and I quickly caught the tail end of the Kepler runners who had set out an hour beforehand. They gave me some awesome encouragement along the way, and it really kept me going, hopefully I didn’t make it look too easy cause it most definitely was not.

I reached the open tops around 55mins. There was a bit of headwind, it was a little bit cooler and I had to roll my sleeves down to keep myself comfortable. The cool air didn’t help the stitch I had been battling the way up or the cramping calf muscles, so I took the opportunity to take in a leppin as I negotiated the crowds of people on the narrow board walks. I started to worry a bit here as without cramp-stop or some electrolyte drink it was most likely going to be the biggest threat to my current lead. I didn’t seem all that long until I reached the Luxmore hut, I rounded the corner and there it was, one of the largest gatherings of people at an alpine hut I have seen before! Now the next question was where do I go to turn around? Luckily there was a tiger(?) there to tag and it was back down the hill…. In all the commotion I forgot to grab some drink…whoops…

It took me an hour and 5mins to get to the hut, and from some rough maths in my head I had worked out what I needed to do was get back down to the bottom in 25mins. When I passed Kristan I knew I had a good lead, and then Grant a bit further back I was confident baring any mishaps I had it in the bag. Right on the bushline I passed about 5th place in the Grunt who exclaimed that I was on record pace which got me all the more excited. Through the majority of the top part of the descent was a steady stream of people, some of which I knew but most I did not, all of which sounded like they were cheering me on. I think this made me even more excited and made me run even faster!

Eventually this enthusiasm caught up with me a bit and I was revisited with some cramps. There was less runners towards the bottom of the hill and I was slipping behind on my target time, but It did mean that I had a rare moment to reflect on things, and soak it in a bit before the final flat section of the race.

At the drink station, 6km out from the finish I made sure I stopped and had some sports drink to alleviate the cramping, and I think it worked. Unfortunately my legs were not too happy with me from the beating I had already given them. The legs were pretty dead but I was running scared as I knew Kristan could have it over me on the flat section. The idea of breaking any records fell by the wayside but I still was going to blast out a pretty good time if I just kept the legs ticking over. The finish finally came into sight and I put in a final effort to get there as fast as possible, to let the pain stop as soon as possible! I was looking forward to breaking the tape, but it appears that they were not expecting me to finish as early on as I did and they forget to set it up.

I crossed the line in 1:56:26 for what I found out later was the 4th fastest time ever. Kristan may have put a little time back into me at the end but I still had the same lead of around 5mins I had at the top as I did at the end and finished almost 10mins ahead of Grant in third.  I was very happy with how I ran and what I achieved. Thank you to everyone who helped and cheered me on in the race, and sorry if I didn’t thank you at the time either, but it really helped. I had one of those days where everything leading up puts you in a good place, then everything fell into place on the day and everything worked out how it should. That part was possibly more satisfying than winning itself! 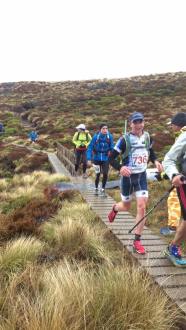 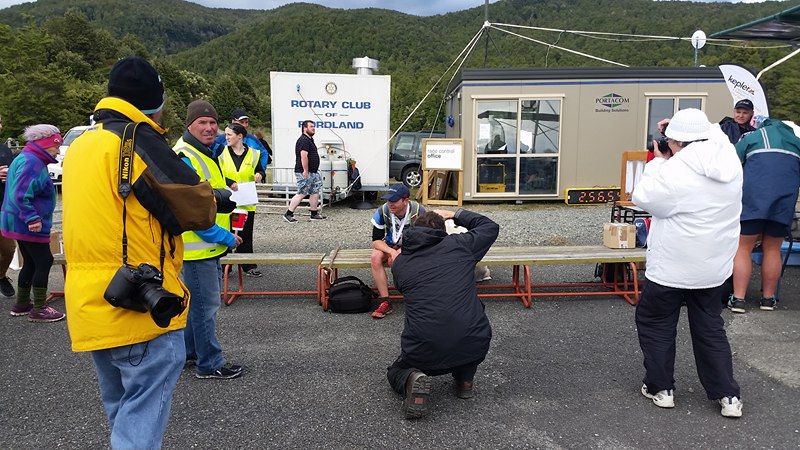 Catching my breath at the end

Across the Finishline…too quick for the tape!

Special thanks to Emma and Hilary, for their support at the finish and Jayde, from out on the course!; the Clark’s (Their Te Anau Crib is for sale if anyone is interested) and the McGettigans, Accommodating me, and cheering me on at the finish; Michael and Katie, for driving me down and back; Bivouac Outdoor and Invo8, also for their shoes and their continued support.