Just a couple of easy weeks after Coast to Coast I was back into some racing again, this time with Team Swordfox for the Absolute Wilderness Adventure race. There wasn’t much hesitation on my part to jump at the chance to race with such an experienced team!

Brent is an orienteer from way back so I knew him pretty well beforehand but when Ash and Naomi arrived on Friday evening it was the first time we had met let alone raced together. So I found it a little daunting to be lining up on the start line early in the morning in our wetsuits with these guys. We all knew we had a good chance of taking out the win, and I certainly didn’t want to let the team down!

It was super hot work running downhill in a wetsuit to the rafts and as we expected it was neck and neck between us and Team Contour roofing at the pointy front end of the field. The heat really started to hit us in our wetsuits the minute we started paddling, with no gear other than our wetsuits we were pretty thankful of the raft guide who happened to have a cup we could drink out of. It was nice to start with a paddle, which was pretty relaxing apart from the paddling hard bit but I knew this was probably going to be the easiest bit of the day.

It was soon time for transition and we sprinted from the raft looking to get a jump on Contour Roofing. I was terrified of holding the team up getting changed at the transition but it turned out I was pretty much first to be ready! From the rafts it was into a trek and straight up hill for something like 400m vertical. We stayed neck and neck with the other team all the way to the top, it was tough work and I think everyone looked to be pushing hard. I even got the honour of clipping the first checkpoint. There was a little confusion however at the next control when the flag was nowhere to be seen at the right spot. We all hunted around until Brent managed to spot the flag nestled in some bushes where it had blown too in the high winds. Both teams regathered here and Brent made a decisive choice to cut low through the trees while the others headed up a bit higher. Once the gap was opened we tried to push the pace as much as we could to open it a bit wider. Being out of sight has its advantages and we used it to Sneak into transition about 1 hour ahead of the estimated time.

Arriving a little early put our support crew into panic mode, but it all worked out alright in the end as we got away as quick as we could. Just as we were heading out we came across the other guys, so we got a good gauge on how far behind they were. We cruised around the rest of the bike in some pretty hot conditions. I drank a lot of water which is unusual for me, and probably a good thing too! Brent did a pretty good job of the navigation, from what I could work out, only one extra bonus hill, as there was only one map it was a new experience for me racing around without the map! 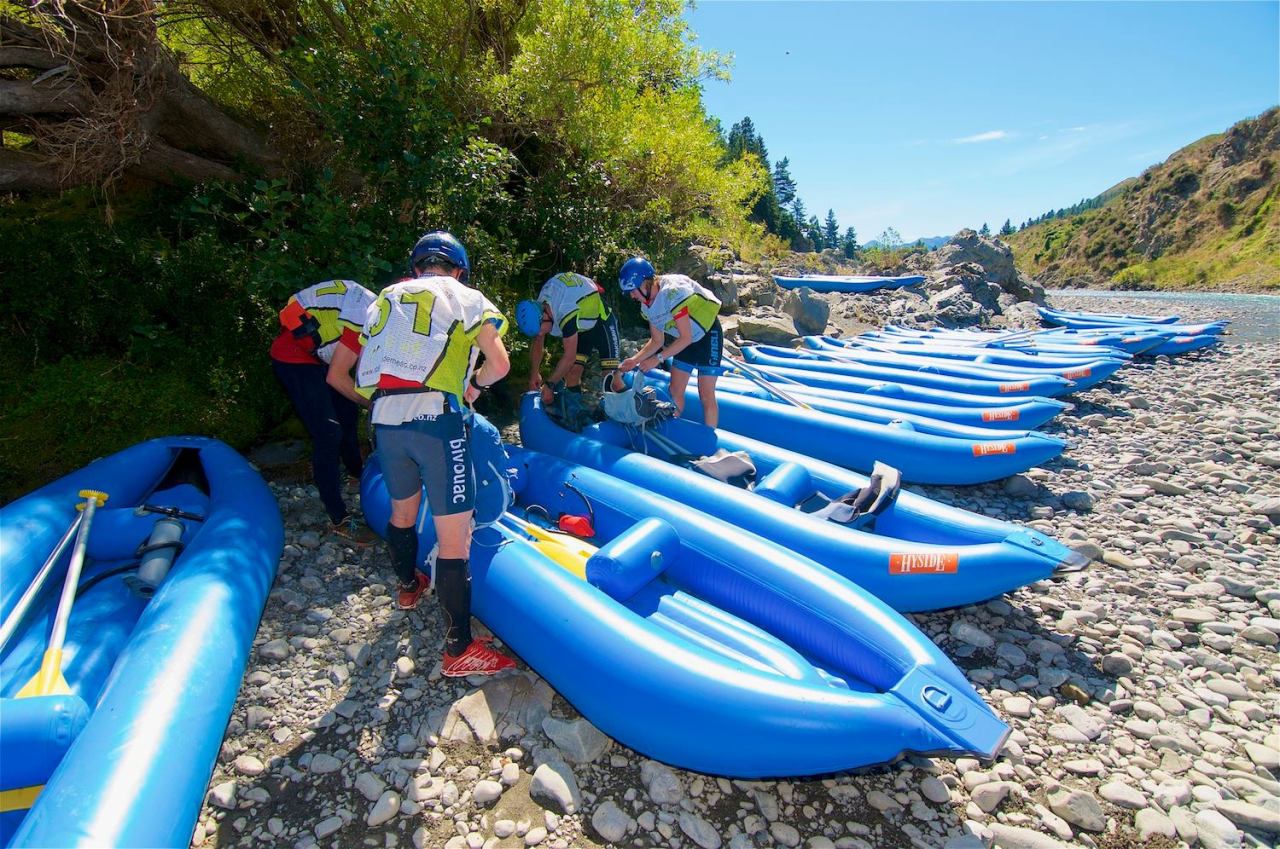 Getting in the Godzone canoes for the canoe down the Waiau

We jumped into the Godzone canoes with our lead in tact and had a good paddle down some relatively exciting rapids. It was the perfect way to cool off. Ash was steering our boat, and he was pretty skilled which made it an easy trip down for me, and I was able to really enjoy it. Shortly the lazy paddle down the river came to a halt and we were back into business on the bikes.

There was a big climb to begin with and then some tricky navigation, where reality didnt quite match the map. Brent was right on the money and I suspect we gained a bit here on the other teams. All we could think at the time was that there might be some lost teams out there in the night time! I went into a bot of low patch once we got down into the riverbed. I was running out of food, and feeling a bit hungry so I forced myself to eat which seems logical in hindsight but sometimes in the heat of the moment its easy to forget the basics. I was completely out of water too by the time we went into the remote transition to prepare for our last trek.

Naomi had some spare food to help me out which was great and I managed to get back on top of things again. It was about this point where Brent was looking a bit worse for wear, but he soldiered on until we got to the massive climb I had been dreading all day long. 600m vertical just for one control seemed a bit dumb really, im not sure what the planners were trying to achieve by putting a checkpoint up there but, as we were in the lead we needed to get up there and get it. Half way up I was convinced I would be able to make it to the top. By now we had all strung out a bit, each of us plodding our way upwards. Ash was really strong up the hill, carrying two packs even, but eventually we all made it up to the ridge.

From the top we reckoned we had about an hour of daylight, so we were going to be biking in the dark…. At the last transition we opted to not put our proper bike lights in so we had just our basic compulsory lights. Back at the remote transition we had to take a minute out of the wind to down our cans of coke that were provided for us, a very welcome surprise/reward for going up and down that massive hill. Into hour 14 of our 12hour race and on the bike home we finally got to the last saddle. By now we were pretty comfortable we had it in the bag, so there was no need to worry about going too reckless down hill. Immediately it became apparent that we needed lights on as it was pretty dicey riding in the almost complete darkness. Turns out that Brent and Ash were prepared with lights that were pretty good because Naomi and I had lights that were pretty pathetic!

It was pretty nice to come down onto the flat, seeing that finish banner lit up and knowing we were there to cross the line in first place! I good finish and a job well done. I really enjoyed racing with these guys, I thought we all got on well together and were pretty evenly matched thoughtout the day. It was nice to race in a team with a lot of experience to see how a good team works! Switch out me for Stu lynch for Godzone and these guys should have a pretty good shot at a top placing!