Second time, not so lucky…

Well actually luck doesn’t have much to do with it really, I was fairly well prepared for the Luxmore Grunt, I would say even better prepared than last year, but things just didn’t go quite the way I planned when it came to the race on Saturday. I was feeling ready when the time came to hit the start line and as expected Jack took off to the front. I followed at my own pace leading the charge of the chasing pack. I could tell after about 10 minutes into the race this group had reduced to just two behind me and by the time we hit the drink station Jack was barely within sight. Unfortunately for me, hitting the drink station is were things started to sour for me.

The stitch, an old friend that sometimes comes to visit, showed up. Funnily enough I only ever seem to battle with the stitch during running races but never during orienteering. Great, just before the hill and I was going to have to push through this rubbish. Usually when I get to a hill I feel like I can just pound away, eating it up one little chunk at a time, but today for some reason life was all just a bit harder. Jonah decided I was going to slow for him so he finally pulled out and passed me, and then away, while Ryan was still sitting right in behind me. Eventually 10 or so minutes into the climb I started to feel a bit stronger, the stitch was going away a bit and Ryan had dropped behind and from the brief glimpses I caught of him he was walking sections of the track. I forced myself to run all of the hill still with the hope of being in contact with the other two in front.

Into the open the wind was howling, it was tough work into the cold headwind up the final part of the climb. I managed to spot Jonah but no Jack as I hit the boardwalks. This is were it got pretty tricky to negotiate as the tail end Kepler runners were taking up most of the track and possibly didn’t hear me coming. Unfortunately running turned into a contact sport for a small majority, for which I apologise for now, if I brushed past anyone too vigorously.

When Jack came back on the return I could see he had a good lead, probably unattainable, Jonah however was closer. But the biggest fright for me was how close Ryan was now behind me at the turn. Running back down hill I went to put the accelerator down and there was just nothing there. The harder I pushed the more prevalent the stitch (which had evolved into stomach cramps) was and it was now clear I was in trouble. Ryan must have sensed this, he pulled out and went for it on a mission to run down Jack.

Left in no mans land I tried my very best to push through the pain, hoping that the by pushing through the bad I was going to get to some good but it just wasn’t happening. As well as the intense stomach pain, was the intense frustration of not being able to run as hard as I could down hill  I knew the gap was getting bigger and the pain wasn’t going away. I think maybe the stress of it all probably made it worse too and there was still 5.5km of flat to go….

It was a lonely, painful run back to the finish. All I could do was focus on getting to the end, which actually worked quite well at distracting me from the pain. I knew vaguely what time I was on target for and aimed to keep it under that two hour mark. I crossed the finish line 13 seconds under that mark, stayed around long enough to congratulate the winner and place getters then went to crawl under a rock….tail between my legs a bit. Jack ran a really good race to take out the race with the second fastest time ever, not too far off the legendary Phil Costly record of 1:52, Jonah took second place about 30 seconds faster than me last year and Ryan about 1 minute ahead of me. Really cool to see 4 of us go under the 2 hour mark, a club of only something like 13 members over the 29 times the race has been run. And now I have the illustrious title of the first person to go under two hours and not get on the podium! 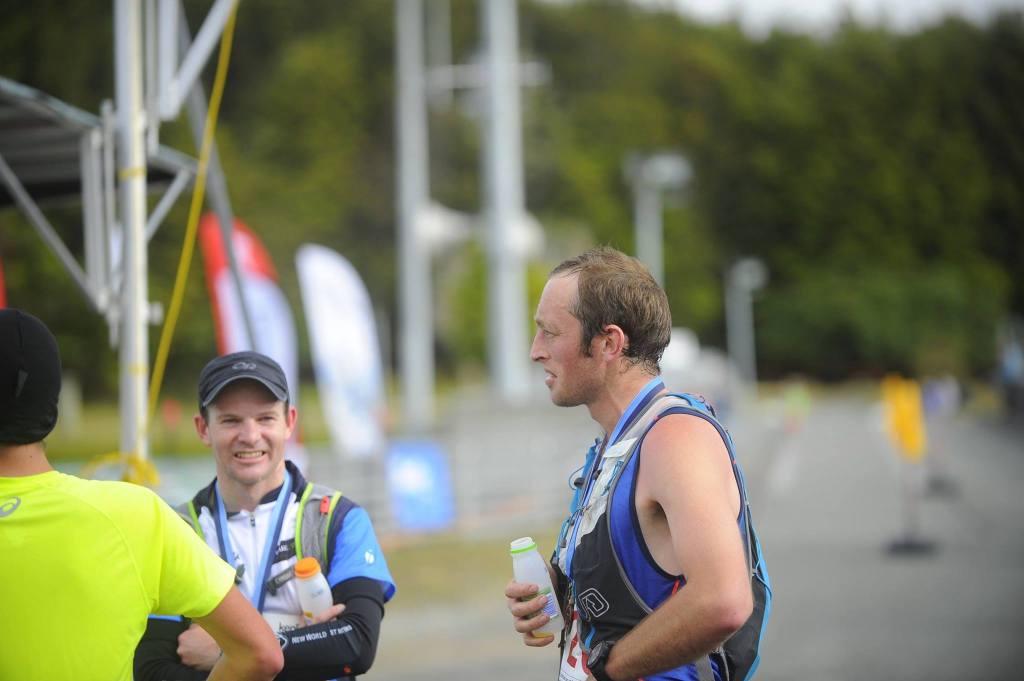 After last year having a perfect or close to perfect race, I was keen to come back this year and be one of those challenging the records. I think I even said after last time round, more satisfying than winning was achieving my goal, which is not something I can say this time around. I was targeting this race for a long time and its frustrating not to deliver to what I believed my potential was. In hindsight I may have had this goal hijacked by the trip to China, and I peaked too early, and potentially picked up the stomach issues there as well. But these are all convenient excuses, and in reality so much comes down to what goes down on the day and I am happy that I at least tried my best, and didn’t give up either when the going got tough, and if anything I can walk away knowing that ready for the next race! (after a little break for summer of course)

Apart from my average race, I am super proud of Hilary, who had a really good race! She had a pretty rough time last year, and has come back from back surgery in March to smash her goal on the day at the Luxmore Grunt. She was targeting this race as a goal to return to running and to raise money for the Methven Care trust which you can read about it and donate here!

As always, thanks Bivouac Outdoor and Inov8 for supporting me!