Crossing from East to West via the 3 Passes

Not long after Godzone, a weather window opened up for the perfect opportunity to cross across the main divide via a classic Arthurs Pass tramping route, known as the Three Passes. The plan was to run over in one day, which meant  starting at dawn and finishing in the dark!

Tim, Myself and Matt met up at the Bealey Bridge across the Waimakariri, while Nick and Will drove over the night before and camped on the West Coast. In the predawn light we set off with a bit of low cloud hanging around and obscuring some of the nearby peaks which were covered in a light dusting of snow. We made good time up the Waimakariri river, despite there being a couple of differing opinions on where the trail actually went. It was almost 10am when we reached the point just beyond the Clough Cableway where the trail makes its way up a river gorge to Harman Pass. 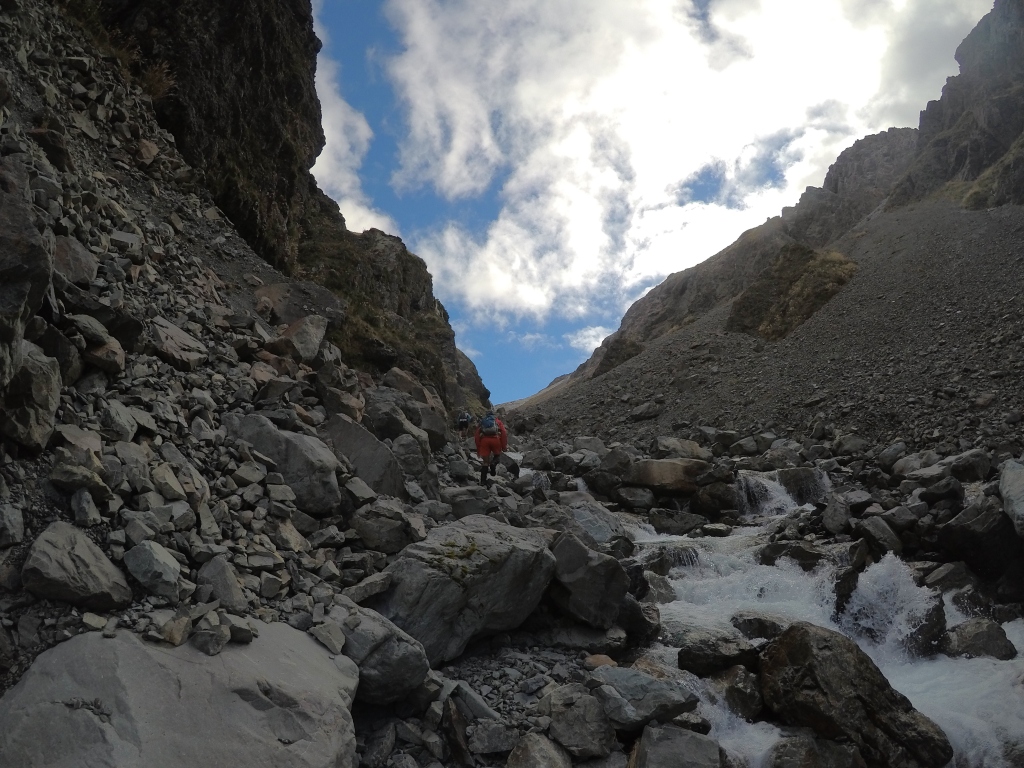 Heading up to Harman Pass

There was a cool wind blowing up the Taipoiti river, but the climb was reasonably steep and we made quick time through to Harman Pass. Harman Pass had a light dusting of snow on it which made for a some slippery footing if you were not sure of where you were putting your feet. Beyond the pass we made our way through a boulder field which narrowed into the remains of the old Whitehorn icefield. The Icefield had all but melted away, just a few remains of Ice in a narrow gorge of loose rock. We didn’t hesitate very long in here at all, while avoiding getting our feet wet, we passed through all the while surrounded by small rocks rolling down from the scree fields above. 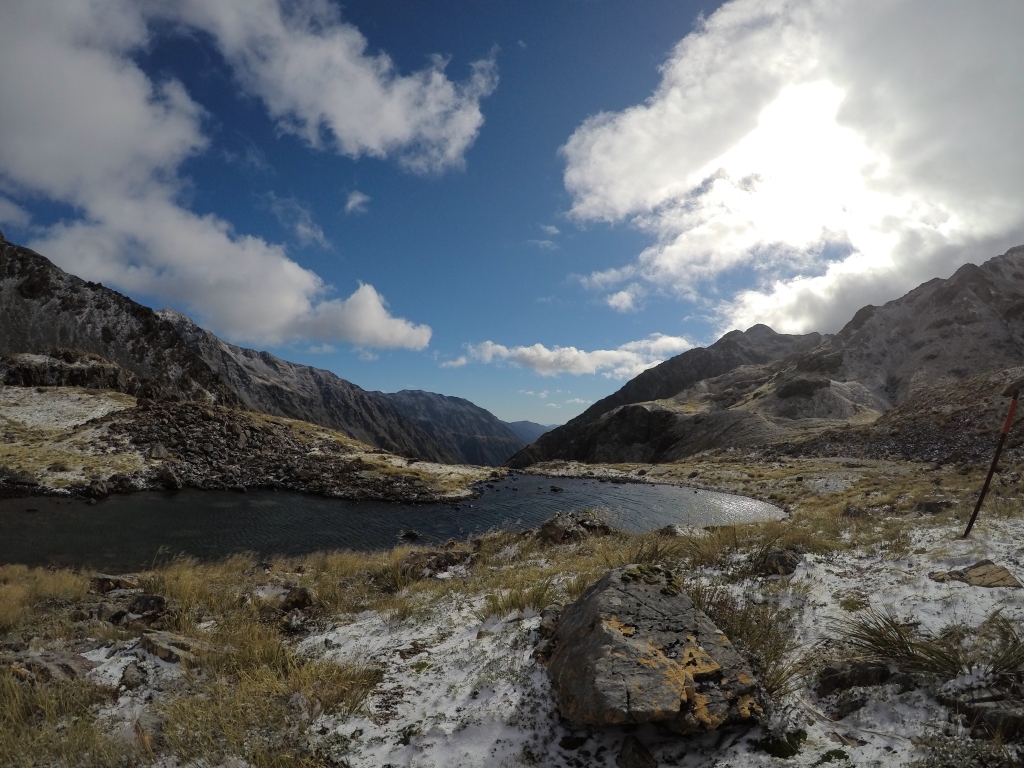 The Snow was thick on Whitehorn Pass, and we actually ended up a little too far above it while avoiding some of the worst of the scree at the very pass part of the former Ice field. Cutting back towards the pass we found the route down fairly simply, and boosted it down to the valley below. With snow covering a lot of the cairn’s we had to make a few educated guesses in places to identify where exactly the trail was leading us. 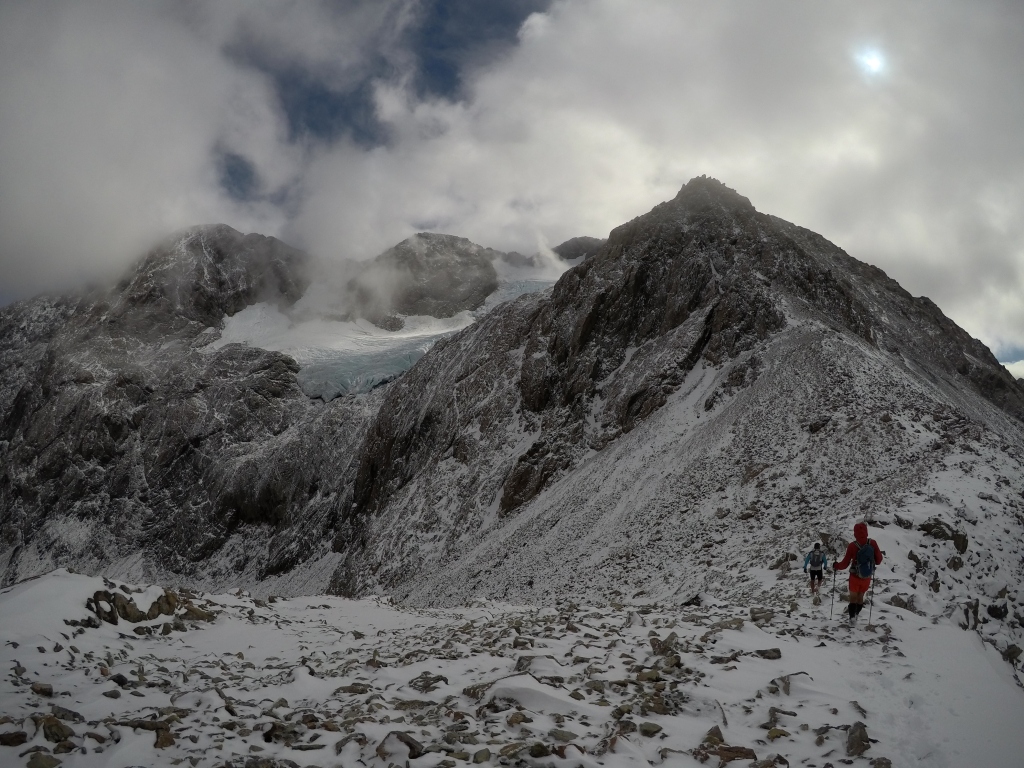 About 20mins from the Park Morpeth hut we crossed paths with Nick and Will. Pretty amazing really that it was almost exactly halfway! There was time for only a brief chat as by now it was after lunch and the sun was starting to make its way down again. Finally we were able to get some nice easy running in up the very head of the Wilberforce, on the river flats. While making our way up ahead we could see the Trail where they once thought it was a good idea to build a road. When we reached the end of the road we could see why they gave up. There was a very steep scree slope to negotiate before we popped out onto the magnificent Browning Pass, and Lake Browning. There was some really fantastic views especially with the fresh snow about! 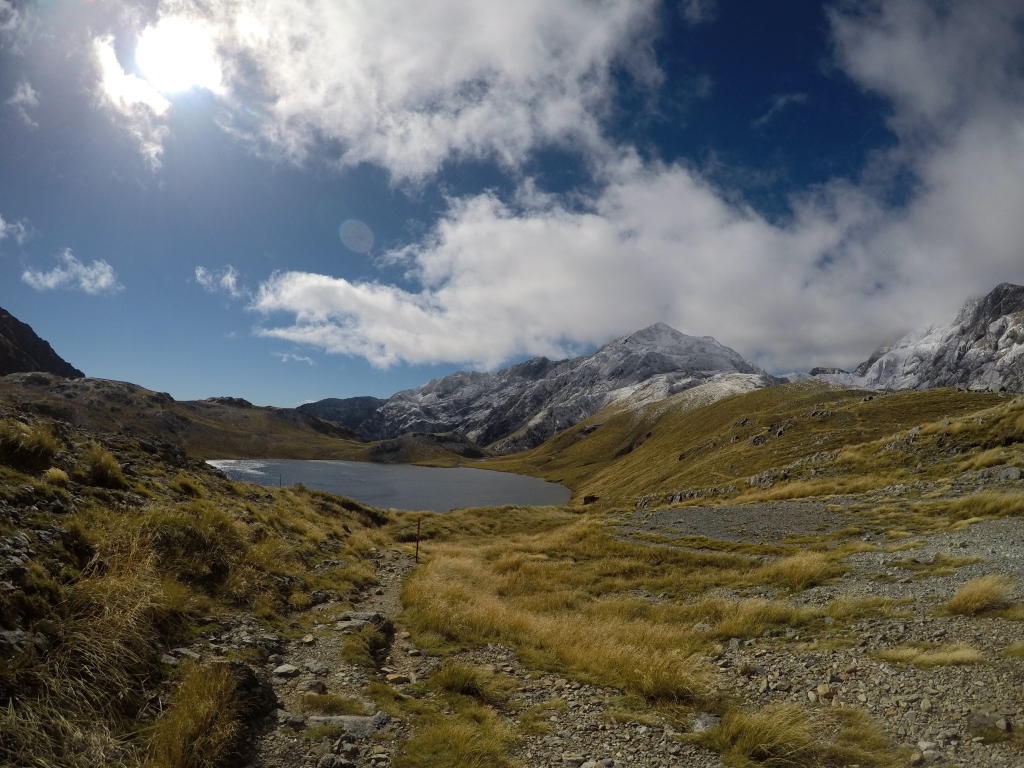 There wasnt much time to soak it in, we still had a good 20 to 30kms to get out, although it was all down hill (mostly) it was tough terrain to run through. Not far away from Harman Hut I rolled my ankle quite badly, I thought for a second that I was going to need airlifted out, however I managed at a somewhat now slower pace to keep moving. By the time I hobbled into Harman Hut the sun had gone and the air temperature had dropped quite a bit.

Matt had some painkillers that he dosed me up on and we got moving again, initially making god pace but we slowed considerably in the long tussock grass over Styx saddle. By 6pm we had reached Grassy flat hut, and it was looking very pleasant in the evening sun shine. Unfortunately we still had a good two hours of running to get out, and it was going to get dark.

Turns out the Styx River trail has suffered a bit with recent floods, and a quick check of the latest DoC status of the track says its impassable. The going was good for a while, then suddenly the trail stopped abruptly and we would have to scramble down to the river bed and skirt around the edge. One such cliff we got too, Tim immediately, without stopping to look at the map, rushed up the edge of the forest around the river and started scrambling hurriedly up some near vertical walls. Eventually Matt and I were able to call him back, and embarrassingly we headed back to the track and quickly were back on the marked trail…whoops….

The trail now became increasingly washed out and darkness was setting in. We donned our headlamps, then had to make a fairly sketchy river crossing to make it around a series of washed out river banks. The worst of it was now over and it was just a plod along the grassy flats at the end of the trail where we found Nick’s car, and our ride out of there! Awesome day, amazing terrain and a fantastic run, definitely worth the effort!

I took my gopro and created a little video of the day, so rather than bore you with the details you can watch it below: