Approach: with caution, made sure the navigation was good. Took track option where possible.

I think this approach was good as I was unaware of how technical the course would be. In hindsight it was not as hard as I thought and I should have run harder. I was still trapped in training mode and bumbled about on the first 2 controls. It was not until I was 20mins into the race I really got into race mode. By this stage it was a bit late. I however did not lose considerable time on navigational errors and mainly on route choice errors.

I was happy about how I navigated but disappointed that maybe I didn’t run fast enough.

The pre-start was something that I had prepared for however it took a lot longer than I realised. The heat and the distance allowed time for the nerves to build to almost panic level. I managed to calm myself down before the start and slip into orienteering mode once I got closer and I’m pretty happy with the way I went about that. 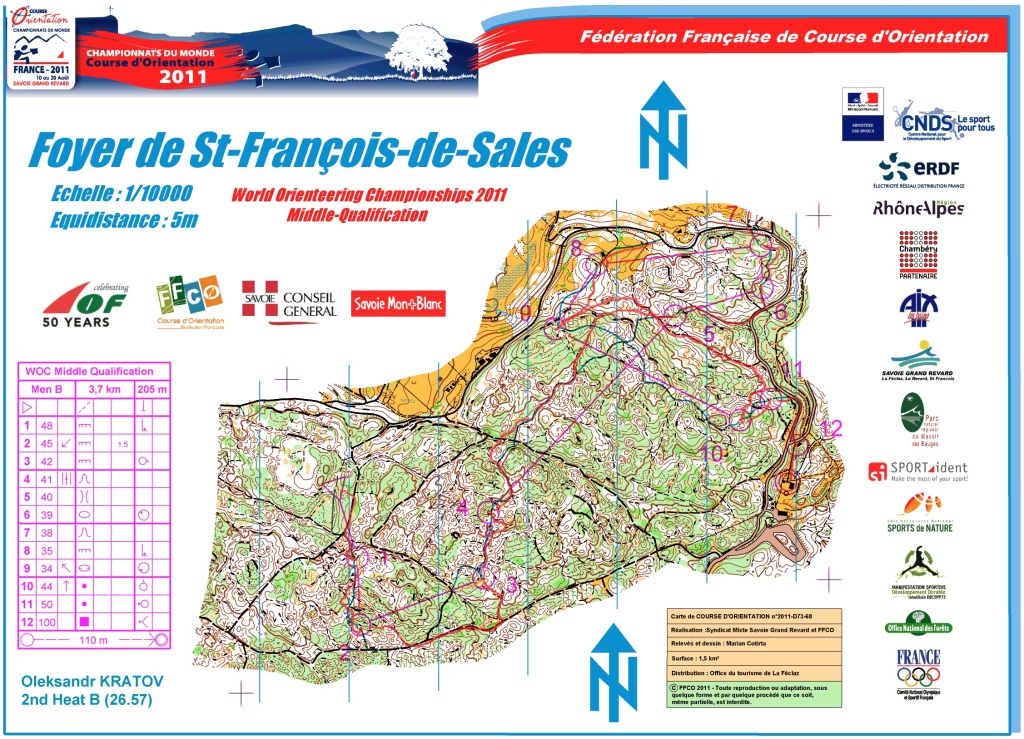 Men Qual B Map. 2nd place getter Kratov's route along with my route

My initial thoughts on picking up the map was to head out to the track as soon as possible. I had time on the way to the triangle to check out the other option, to head to the open land as Kratov did. I chose to go to the left as it appeared the fastest to me. I did slow up going across the stoney ground and hesitated at the track not noticing the open land surrounding the track was actually mapped. Hesitated at the depression on entry to the forest as the open looking land appeared white on the map. What was a simple entry to the control I approached with real caution just making sure i was going to nail the control.

The plan was to go straight on compass to the depression. It was a bit rocky and covered the ground really slow. I appeared to lose contact with the map at the depression and got a little confused with the compass direction. I mistook the small cliff across the depression as the large cliff and climbed up the side into the stony hillside. I stopped here and realised where I was pretty fast. Not in an ideal location. Relocated, ran through the depression and spotted the control guard. Headed down the hillside too far and had to cross a shitload of cuttings to get back up to the control.

I think this mistake was caused by trying to read too much detail while moving and as a result didn’t move fast and didn’t navigate well either! Relocated ok and didn’t panic but again didn’t approach the control site with much confidence whatsoever.

Obviously the best route here was to go out to the track to get around the green hill. I missed the track out of the control through the small depression as Kratov did and onto the main track. I went across the green which was not very fast at all…Once on the track I began to hit my straps. Initially I had planned to go the same way as Kratov, but hesitated at the last minute and decided to go all the way around and come in on the track to the control. I executed this pretty much as I planned. I think now it was possibly faster if I went up the left track and then cut across the green rocky spur to the control or even to the left like kratov to avoid slowing down in the crap. The control was essentially on the edge of a big depression which was a big catching feature…

In summary it was a bad route choice out of the control and I lost time bumbling about in the green.  I needed to have a good exit plan planned in advance, maybe in the down time between 1 and 2? Again I took the conservative route right around the track and probably lost some time hesitating at this point.

This leg looked easy and I had time to plan this one on the way to 3. Straight on the track and then up the tight re-entrant. Somehow when I got there it didn’t quite look how I imagined and I missed the turn. I knew when I could see the open land up ahead. I had a slight panic moment but this quickly passed and I set about figuring it out. I quickly realised that I was to far to the right and cut back in picking up that cliff then there was actually another really tight (hence why it was unmapped) re-entrant just before the control that I hesitated on. I was confident enough to just go forward until I hit the control.

The map was a bit strange here and after talking to a few people I found out that I was not the only one to have made this mistake. I was pleased with how I dealt with the control after the mistake. Did not panic and trusted myself and my position on the map. Found the control OK but again I was slow and lost time through hesitation.

The ‘King leg’ as Martin would call it. Only really one way to go and that was on the track. Planned to take the same route as Kratov. Jumped on the back of an Estonian guy who started to nail it along the track…except we missed the first turn and ended up a bit to far left and cut down to the main track. Here I stupidly tried to follow him as he bashed his way into the forest instead of heading up and taking the track through the forest. Eventually he had a panic moment and decided to cut through the crap and tried to squeeze my way onto the track…eventually I got to the track but that dicking around cost me a bit of time. This mistake knocked my confidence a little bit and took the main track slowly following the map all the way. I continued and deliberately went on the solid track around the hill with a good entry through the re-entrant to the control.

In hindsight I should have taken the risk with linking the indistinct tracks however it was quite fast into the control from there and one more contour climb. Still it was the overly safe option and I think I paid for it later. I guess this leg summed up the race for me, had the right idea just didn’t execute it as cleanly as I should have.

This was another pretty easy leg, out to track, road then up next track. Chris went straight around the hillside and regretted it. I think I did a good job of this one picking the right route and I nailed it.

Again a fairly straight forward leg, up the track then round the spur. In reality the spur seemed pretty steep and I wasn’t keen to climb….so I drifted out to the right then got trapped on the other side of a stupid log on the edge of the control circle. Again hesitant into the control circle, and probably should have been able to cut around the top of the tree before going into the re-entrant but was weary of  going too far up the re-entrant and having to come back down to the control. I guess a bit of bad luck that there was a tree there…

I had the furthest split and therefore the best option I saw was to get out to the road and get some running in. This really helped to flick the switch in my mind that I was racing. Plan was always to cut through at the semi-open however I think the white at the bend in the road would have been straighter and much faster. Halfway across the open i realised that I could see the control and straightened up! It was a brutal uphill to the control with cameras all around. Quite messy considering all the runners scattered about too.

There was plenty of time to plan this and the next leg during 8. Wanted to take the easy slope into the control and managed to hit it ok even if it was kind of semi by accident. Felt like I was climbing out of 8 to get around the hill and felt I was drifting right but I was spot on and nailed the re-entrant. It wasn’t too bad vegetation wise and I was sucked into the control quite nicely.

Two options came to mind, first the less risky track route, and second the more risky network of tracks leading roughly to the control. I made the choice to play safe and hit the main track. I did think about cutting up under the cliff directly below the number 5  but once on the track i was moving fast and didn’t have the courage to get stuck in. Cut round the bottom of the hill and onto the next track. In hind sight it was probably fast to have gone right down to the road and round and up. However I cut the corner and pretty much nailed the control on height.

I think that the Kratov route was probably the best and initially I thought I had lost it big time on the track route. It was apparently faster to go on the track for the women but not so much for the men. I was disappointed with my route here but looking at the splits and it was maybe ok as I still had the 14th fastest split on that leg?

Straight forward and I nailed it. Compass to the cliff then it was just boulder, boulder and control. No time wasted here, close to the finish!

Just a matter of following the tapes and running hard to the finish. I cut across the stony ground on the corner which apparently wasn’t the fastest way although both Chris and I felt it was!