The story of this event starts way back sometime in late 2010, I think earthquakes existed in Christchurch back then… Somehow Tim and I thought it was a wise idea to crash a dessert party around at Viv’s place. Unfortunately for us this plan sort of backfired and Josie wasted no time in teaching us a lesson for turning up unannounced and signed us all up as planners to fill the calendar for the next year! 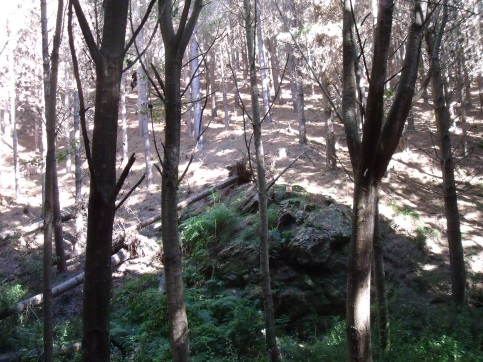 I had the honour of drawing Mc Queens Pass from the list and worked on some courses that would keep the steep climb to a minimum, having just run there recently in the Canterbury champs.  The first visit to the map was an eye opener; it was much steeper than I remembered. The first control site we went to check out exposed our navigational weaknesses and we struggled to find it, settling on another site instead… Not such a good start. It got a little better from then on in and we found not only the original site we were looking for but the others I had marked on the map beforehand too.

One week out from the event in February 2011 and everything was pretty much ready to go, just some finishing touches to the maps that I planned to do on Tuesday evening… then pretty much as you all know the world was turned upside down and shaken a little bit. We had little option but to cancel the event that weekend plus we had no idea in what state the map was in. So the event was postponed for the first time.

Things were all set to go again in October 2011, but the rainy Tuesday night before the event I rang to get in touch with the farmer who suggested that the road was in no state to drive in on, so there was no option but to postpone once again….

Finally we got past the Tuesday milestone in March 2012! This time even the weather played its part and Saturday was a long hot day putting controls out. Josie tried to slow me down a little bit by having me lug drink bottles around in my pack as well as controls. It was a long hard day out.

Then Sunday rolled around very quickly, and Pete the farmer was very kind and moved all his stock so we could have the White, Yellow and Orange run through the farm paddocks without traumatising each other! It got hot quickly in the forest, but there was just enough time for us to get most of the White and Yellow tapes and controls out before course starts. We accidently forgot to put one box out on the white course, but luckily with the help of some fantastic Tait Radios I borrowed from work we were able to rush the SI box out and I just managed to beat Kaia to the control, who wasted no time in letting me know that she almost beat me there!

As for the courses:

There was not much choice but to start in a similar location to the Canterbury champs for this event especially to minimise the amount of climb, which meant a slog up the hill to the start. I based the times and distances off this event and looking at the results it appears I judged the distances about right?

Red – most people seemed to enjoy slogging themselves up the hills however there were a few gripes about #13 on long red which did have the wrong description. I apologise for that, it was a small error which slipped through the cracks of multiple attempts to get this event from paper into reality. We tried to pick solid control features, combined with variety and route choice, and as a result some of the controls were potentially not as hard as we could have made them. I think due to the physically of the terrain this was a wise choice and not too many people were over the two hour mark on their courses. Unfortunately for me my attempt to unofficially burgle my own course failed and Chris managed to take 14 seconds out of me in the end!

Orange – we decided to make some late changes to avoid technical and possibly red level controls at the end of the course. Again I tried to allow good route choice options with controls sites that were fairly solid. I think there was one leg we did plan without a good attackpoint. However I think again most orange runners enjoyed themselves and it was good to hear some of them taking a few risks while some of the wiser ones took safer options on some of the longer legs.

Yellow – I wanted to get the Yellows off the boring tracks and into some exciting terrain so the best way to do that was to use some tape. With the tape we were able to get them down into a fairly extreme gully for some extra excitement. I was pleased to see that there was even a little bit of route choice going on in the yellow courses and even one I didn’t even see myself to the last control!

White – again as with Yellow I wanted them to get off the boring tracks and into the forest. I hope I was successful and luckily I heard some of the laughter while getting that last white box out! The second last control for the whites was a little bit tricky and since checking the courses out the grass had grown up a bit and you could not see the control from the handrail feature. I was sorry to hear there were a couple of people out there that mis-punched on this control. It was a little bit tricky but in saying that they need to check descriptions and read their map!

At the end of a long hot day in the forest, everyone made it back safely and hopefully in one piece. I have learned from my previous courses that water is quite essential, and I am glad that after all the pain and suffering I went through to lug the drinks out there, there was very little I had to tip out when carrying them back!

Thanks to all the control collectors to helped me and Josie bring in the controls afterwards. It was tough terrain and it was really good to have willing people to go back into the hot, steep forest after having run round a course already. Also thank you to all those who helped set up the start and made sure the event ran smoothly afterwards. It allowed Josie and I to focus on getting the course out in time! Greg was especially helpful and must have done a 6 or 7 trips up and down the hill transferring gear, people, and controls, which saved a heap of both time and energy.  Finally, Josie was the driving force behind getting this event to happen; she was an excellent controller and organiser, and did a good job making sure the courses were all in order, controls in the right place plus kept me under some sort of control… I hope… for your sake!