I managed to fly under the radar quite nicely with this approach too, but all was revealed before the start as we all lined up.  It was a fast start, and after a little jostling for position, I took the front. I knew my strength was the hill at the start so I worked to use this to my advantage. It was hands on knees stuff too, very tough work, almost harder than Avalanche peak? I built a good lead over Vajin near the top but looking back he looked fairly comfortable and I was feeling it a bit. This inspired me to push a bit harder and block out some of the pain messages my body was trying to get through to my brain. Eventually I burst out onto the ridge line and the suffering could stop…to an extent. 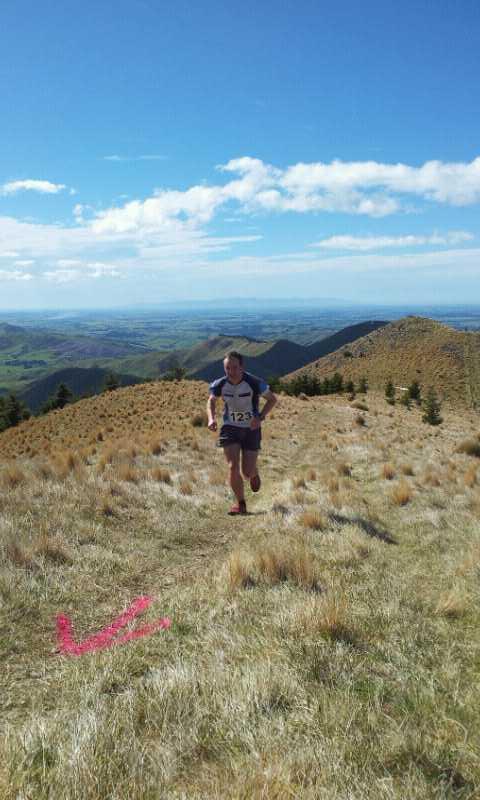 Over the top I wasn’t totally confident of the way to go, but knowing I was in the lead, it was a bit rough and down hill, I opened the throttle. It was a relief to free the legs up a bit after slogging hard up the hill! At the bend I was joined by the lead escort on a Mountain bike.

Down through the forest I started to think about orienteering, checking out the terrain either side, wishing I could be running through there instead of down the road. I made a bit of a mistake at the drink station, missing the water and spilling it. I should have gone back, and taken it but for the sake of 5sec I kept going… not very wise… It wasn’t long before my tongue let me know it was a bad idea too…

I kept trucking on none the less.  At the turn around I caught up with the bike again, I overheard his conversation on the Tait TP8100 radio he had ” …first finisher, will be about 30?  no maybe 40mins? away…”

Then as he passed me a bit later he said to me “when they asked me to ride at the front, they didn’t tell me I had to ride in front of a lunatic!”

Well that brought a smile to my face as I grunted up the hill. It seemed like I went up forever and I was starting to worry that Vajin and the others might catch me. But thinking about it logically, they were probably going to be feeling similar to me, and they had to put in extra effort if they wanted to catch me. So this thought kept me going. Eventually the downhill started again, and it wasn’t long to go now. My mouth was pretty dry by this stage and even though we were told not to, I drank/wet my mouth from a little stream on the downhill.

Luckily there was another drink station a little bit further on, where the walkers joined back. I managed to choke a little bit and felt pretty terrible as I made my way through the last 3km. It was a little bit further than I was expecting as my watch was already reading over 16km at this point. I stole a glance behind me for half a second and spotted an orange singlet. For a good while I thought it must have been Vajin, but turns out it must have just been a marshal. Anyway I left myself no room for mucking about and flipped into cruise control, trying not to think of the pain. It was one small rise after another until finally the finish was in sight. At this point I’m pretty sure I slowed by about 15sec/km and cruised on into the finish to take the win. Sweet. Pretty happy with that. Vajin was about2-3min behind me and 3rd about the same behind him.