To the German Boarder

The day after the day after the wedding the weather had turned and the rain came to spoil the pleasantness. I got a hold of the 2012 WRC map and eventually when the rain eased headed out the door for a run. Germany was fairly close by so I was quite keen to run there and check out the boarder to see it it was any different from what it once was like.

Deserted and isolated part of the Czech Republic…

It soon turned from a little bit of sunshine to dark and grey and the forest felt very isolated. There was plenty of paths and roads through the forest so I guess they get used occasionally. After quite some time I arrived into a valley with a few houses of an old abandoned village left which once was probably populated quite heavily but when the Germans all left after the war the Czechoslovakian government didn’t see much point in repopulating the area so close to the boarder. The weather was a bit grim when I ran through here and it was a bit like a scene from a cold war movie. The forest close to the boarder also felt the same way grey and grim.

At the Czech-German Boarder

I arrived at the boarder and it was almost a bit of a let down. All that was there was a trench and a few markers. I had a quick pause for photos then headed alongside the boarder for a bit. As I ran along in isolation thunder and lighting got louder and closer. The whole way I was feeling just that little bit uncomfortable. Eventually I got close to the point I was going to cut back into Czech and I spotted a boarder building, slightly worried that it might be manned and I had no ID on me I quickly took a pee on the German side (for my Dutch relatives!) and then cut through the bushes evading detection just like in th e movies. Once back clearly in Czech the rain got worse and I started to get cold but apart from that it was really nice forest and I ducked of the track again to claim another one of the rogaining controls. In this one little area I spotted 3 deer the only other living things I saw the whole way. I made it back to the house undetected by humans and in one piece. 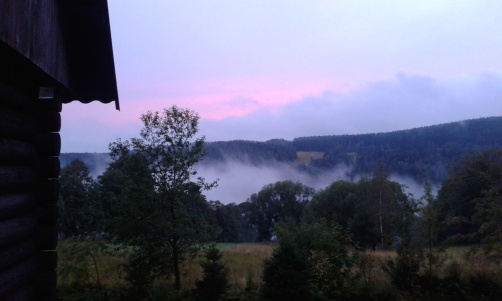 Sunset in the valley

I hung around in the in Rudine for a few more days, a couple more than I intended due to a 24 hour vomiting bug I caught on Tuesday evening. I haven’t had anything quite like that in 5 or 6 years and only came right once I had emptied pretty much all my stomach contents for the previous 24 hours…