Usually I would be out orienteering Queens Birthday weekend but with the carnival in the same place as where Nationals was, and on some of the same maps, staying in the South Island seemed like a much better idea. For once the weather was looking good and the plan was to go ride the St James.

It was super cold when we arrived in Hanmer on Saturday night and we quickly decided without much discussion that driving to and starting from the Homestead was the way to go. The sun was still making its way up as we got the bikes ready and on the road. It was so cold still that I think Dave, Glen, Hilary and myself all started in down jackets. We started out along the road to the start of the track and as the sun came up it got warm pretty quickly. The cold and calm start to the day made for some pretty amazing views. 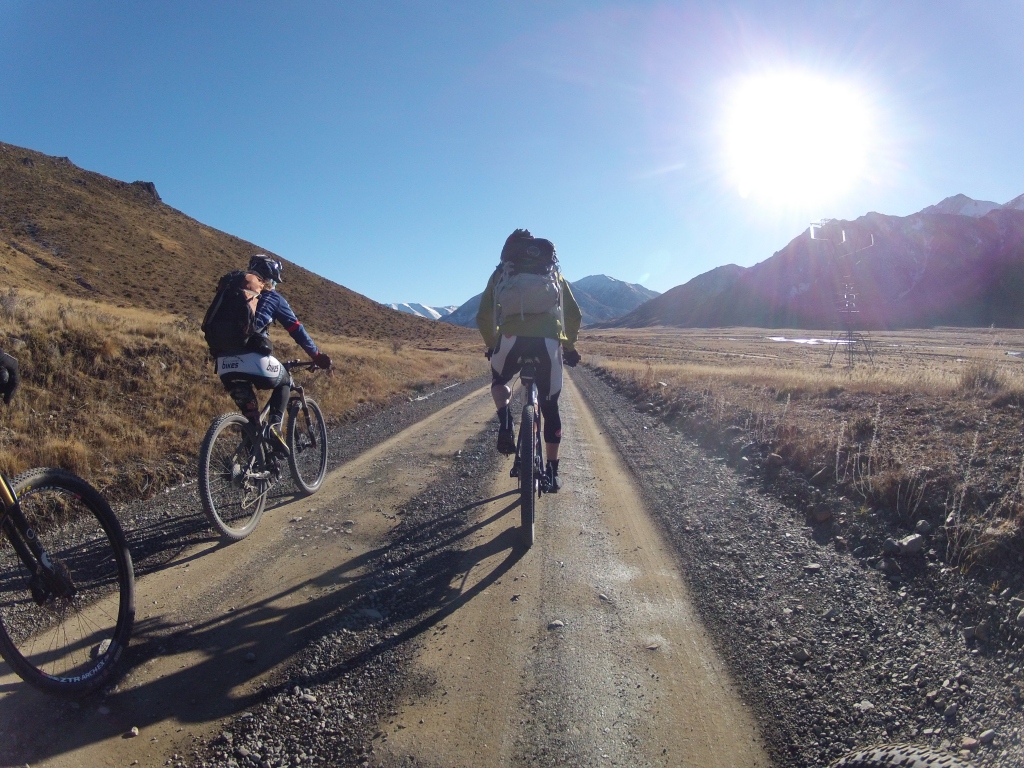 Riding along the gravel road to the start of the track.

There was still a fair bit of snow around Mailings pass which added to the experience and the impressive views. I took the descent pretty easy after my crash in GODZone I have become a bit more cautious on the Mountain Bike and it paid off as I saw Dave slip on some ice in a shady part of the trail. 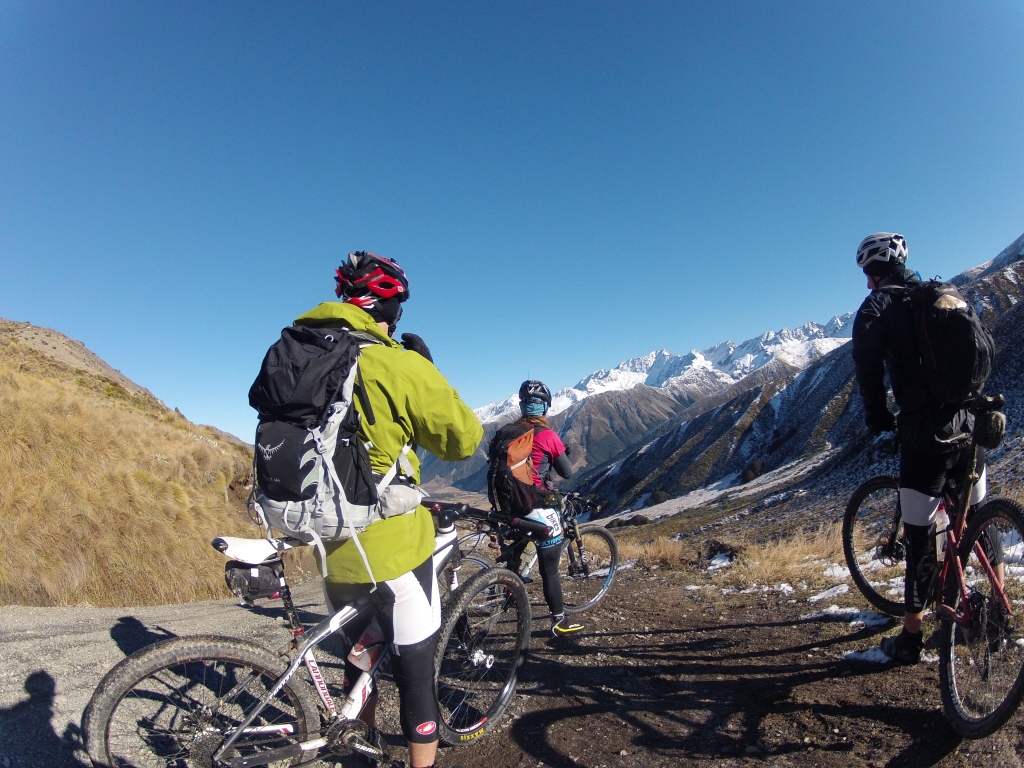 Looking out from Mailings pass

Travelling along the main valley we encountered quite a bit of mud, giving the bikes a good coating. The single track section was fairly easy going and since I hadn’t had much food I began to struggle a bit for a while. There wasnt a lot of time for stopping as we pressed on over the bridge and through some fairly nice flowing track to the hut for lunch. I found the stop for lunch pretty good for recharging the batteries and maybe we had held off too long before having a good stop. I think Hilary found it beneficial too as when we started again she was off like a rocket.

After 2pm the heat of the day started to drop off as we climbed up and out of the main valley. Coming up the valley towards the Edwards saddle it got fairly cold again and any water on the bikes froze fairly quickly. My feet and legs were getting pretty cold and I was looking forward to the final climb to get some heat back in them. 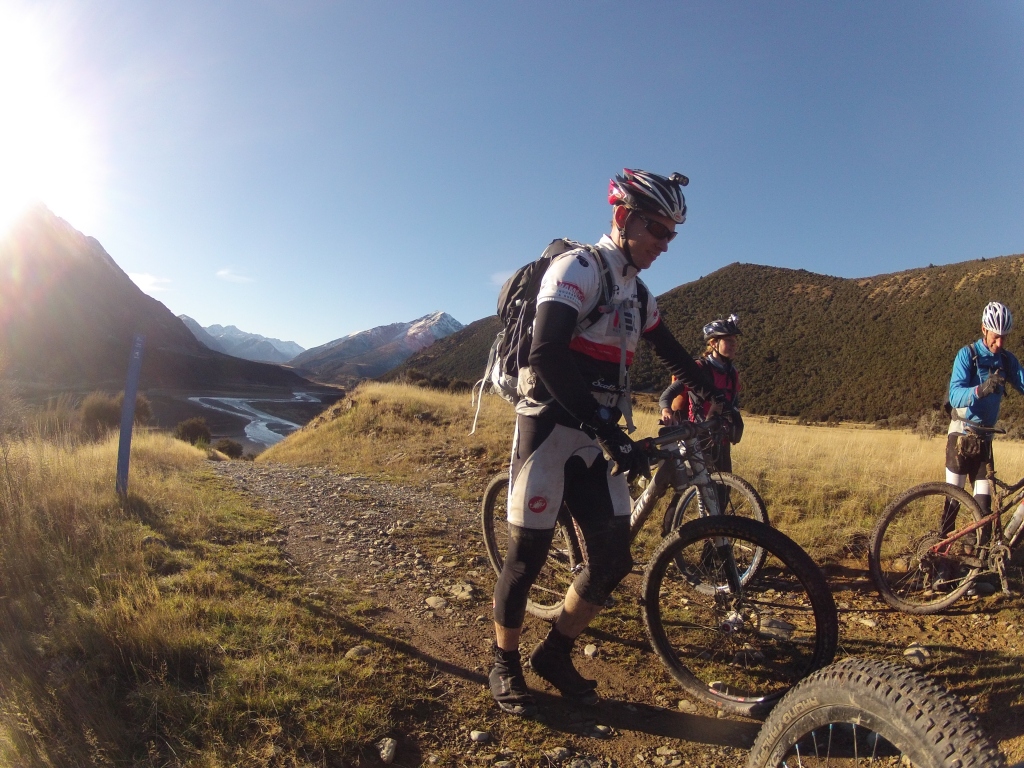 Top of one of the steep hills out of the valley

Sunset hit and darkness crept in as we got to the top of the hill. Dave and Glen took off fast to try and see how far back we could get without lights, the mud was pretty thick however and a combination of frozen and sticky damp mud clogged up Hilary’s back wheel to the point where it would not turn. We stopped, got lights out and freed up the wheel with a stick and some left over water. But when she went to go again, we found that the chain was frozen solid! Another 5 or so minutes it was going again and we were on our way…. until I caught up to Glen who now had the same problem. Hilary didnt want her chain to freeze up again so she carried on and I helped Glen out.

The sun is going down!

The final section of the ride in the dark was not super exciting as there wasnt too much to see! The cold was really starting to set in now for the night and it was good to make it to the end in one piece, and get the heater cranking in the car too!

Glen and Dave headed back to Christchurch straight away while Hilary and I stayed another cold night in Hanmer. The next morning we waited a little bit for most of the chill to clear before going for a run up Mt Isobel. Again it was an amazing day, but it took quite a while before either of us got all that motivated. Somewhere along the way we took a wrong turn and did a bit of bush bashing (good GODZone training 🙂 ) to get to the main track. Once on the ridge top, it was clear and you could see for miles, and being so close to the top we forgo-ed the time window for the hot pools in favour of going to the top. It was definitely worth it too! 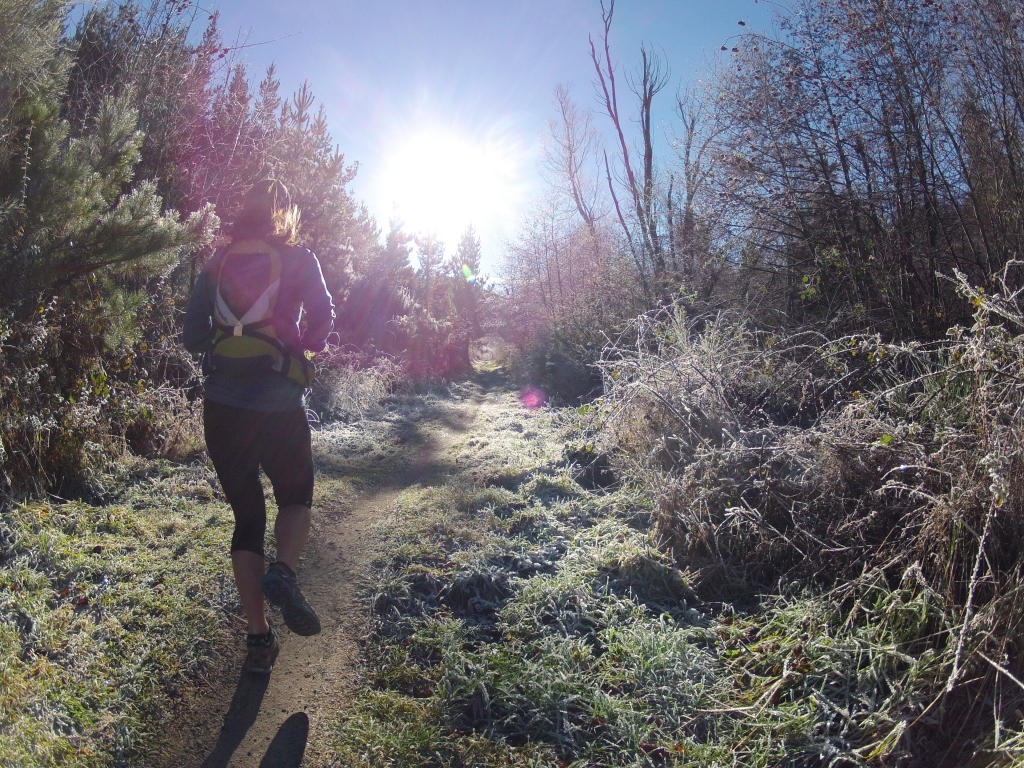 Some Licorice Al-sorts and we were on our way again, down into the cold valley and out to the car, and another awesome training mission with amazing weather and stunning views under our belts.

Hilary at the top