Big weekend of defying the odds

The weekend just been was down on the schedule as a big one training wise. Three weeks out from World Mountain Running for me and 5 weeks out from the Spring Challenge for Hilary but was probably the last free weekend for both of us to have a hard training weekend before Red Bull Defiance which we will be racing together in October.

Saturday Morning we headed up to Woodstock to paddle the last hour of the Coast to Coast paddle along with John for his first time on this section of river. The paddle was realtively uneventful, which was good cause it was probably too cold to fall in. The river has changed a bit since Coast, and the flow was up a bit (from Coast to Coast) making it an exciting change from the lower Waimak! There was several little rapids and bluff’s that were in pretty good condition which made for some fun paddling too. With the short paddle down, John jumped on his road bike and rode back to New Brighton (New C2C route) while Brad, who did the car shuttle drove back to Christchurch leaving Hilary and I to head off for a Mountain Bike ride along the Wharfdale track nearby. 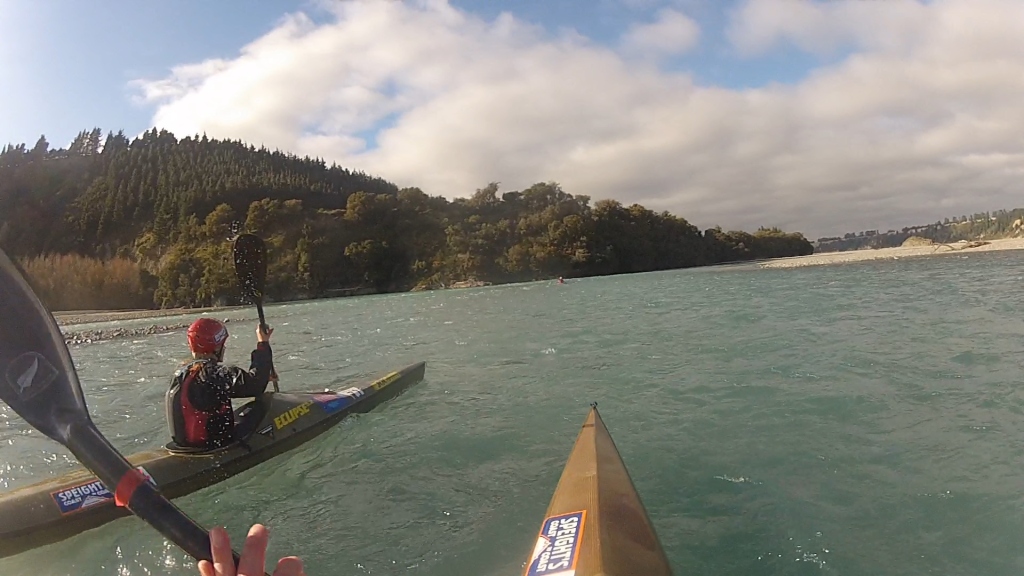 Paddling from Woodstock to the Gorge bridge

Neither of us was feeling highly motivated in the beginning and going in via the link track on bikes was a bit of a mistake. After a very slow first km we gradually started to make progress, both in distance and the motivation levels! There was a huge amount of mud and some quite technical riding with required a little bit of confidence to get through. Unfortunately I put forward a little bit too much confidence and failed to un-clip fast enough resulting in me falling sideways to the edge of the track, hitting the ground, then as I hit the ground I landed on a branch causing the end of it to flick up, clocking me in the face! Dazed and with a little bit of help up from Hilary we were back riding again.

It seemed an incredibly long time to get to the main track, but once we were there it was very pleasant riding and we made good progress towards the hut. By the time we got close to the saddle it seemed sensible given that it was now mid afternoon to turn back rather than ride/push down into the hut and then climb/push back out. We had a quick stop at the saddle and headed back downhill. The heat of the day was gone by now and all the downhill made it a bit chilly riding out.

Blasting down the Wharfdale track

Early on in the ride we had decided it was best not to try to ride the link track, and take the road back to the car. By the time we reached the road end it was also clear that we were not going to get a run in as we had planned so it was nice to relax a bit and cruise back to the car just before dark.

Day two didn’t require quite as early start as Saturday, but it did get a bit hectic there for a minute when it became apparent that we might not have been generous enough with our timing to make the Diamond Harbour Ferry. Luckily we made it into Lyttleton, and onto the ferry with a quick transition just in time! It was quite nice to start in Diamond harbour for a change, not to mention it was quite fun to ride the ferry too! The legs were a bit heavy from yesterday’s bike ride, but we survived the horrendous Southerly headwind into Teddington before the wind sort of turned around.

Back into Lyttleton we transitioned to the car before running from Cass bay up the Bridle Path to the tops. It got pretty hot running up the hill but quickly cooled down when the wind and weather came rolling in from the South again. It was a good solid run, taking just over 2 hours and we were back in Cass bay for the final transition of the day. Both of us were feeling a bit weary as we clocked up close to 10hours for the weekend, but both being quite determined people we went for a short paddle in Chris and Em’s double kayak.

Along the tops above Lyttleton

We set a reasonably achievable target all things taken into account of paddling to Governor’s Bay and back. It got pretty cold paddling into the wind and waves, which made things all the more challenging so to keep our minds active some word tennis was in order. I finally managed to get a win or two on the board. The word tennis helped to pass the time but it didn’t do much to help with the cold! We eventually arrived back at Cass bay to warm up and complete our big weekend of training!