Road trip in the Outback

I reckon one of the coolest things about racing overseas is that you end up going to really interesting places that are somewhat off the beaten tourist trails. Alice Springs and Uluru are not entirely off the beaten track, but since we were in the area is seemed silly not to check it out. Armed with our rental car and two free days, we dragged ourselves out of bed the morning after the race and hit the road.

I sort of figured that Uluru was just down the road from Alice Springs.  Some actual research (after booking flights of course) revealed it is in fact a short way down the road… but a short way in Aussie Outback terms so just under 500km! Once on the main road out of town the road signs definitely indicated the massive distances between places in the Northern Territory, “Adelaide 1563km” and another icon of the Outback, Road Trains. The 130km/hr speed limit helped us cover the vast and flat scenery quickly and before long another cultural experience awaited us. We stopped off at a roadside stop, Road Trains, trucks, tourists, 4WD’ers were all here filling up on food and petrol. Petrol was pretty cheap compared to NZ, but we saw one vehicle fill up with $700 worth of petrol!

Emus… not in the wild however, in a pen at a roadside stop

The road to Uluru was not as major as the Stuart Highway, so the speed limit was a little lower and the next stage of the trip took a long time. Suddenly, Tim from the front seat yelled out “is that it?” claiming to have spotted Uluru…. turns out it wasn’t, it was actually Mt Campbell, and not quite as impressive. Eventually the real thing came into sight and the end of the road trip to Yulara (the main town at Uluru). It was pretty good to get out the car, with 5 of us and our gear tightly packed in plus 24 hours of racing in our weary legs and the DOMS starting to set in.

That evening it was off to have a look at this great big rock. I can confirm that it is very red and very big and quite impressive, both from a short distance and close up. The weary legs also got a good workout on a short walk (~1km) that felt like a very long tough walk around the base. Viewing it at sunset was obviously one of the things to do when there, so we joined in with the hundreds of other tourists in the allocated and well marked area for doing so. These Aussies know how to do tourism en masse, maybe NZ could learn a thing or too!

Short but painful walk the day after the World Champs

Sun on the rocks

Georgia confirming two theories, 1) Roclites are not suitable for Spinifex, 2) Soft Spinifex is not as bad as the stuff at Ross River 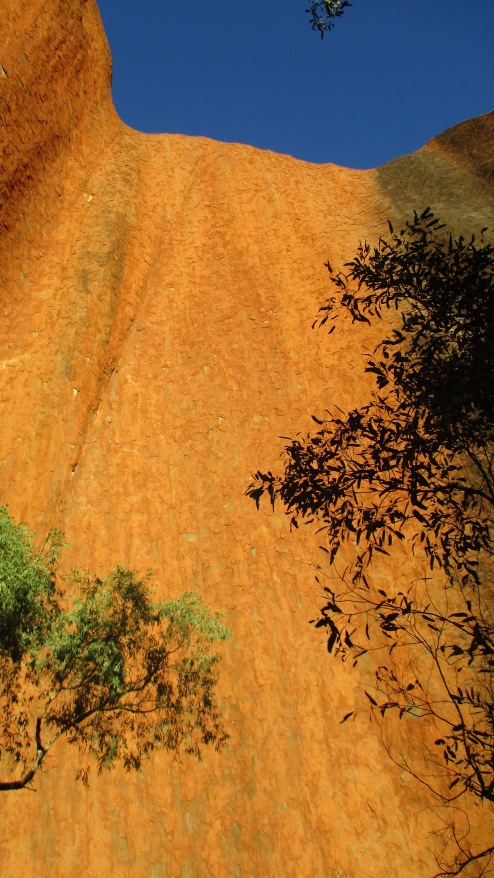 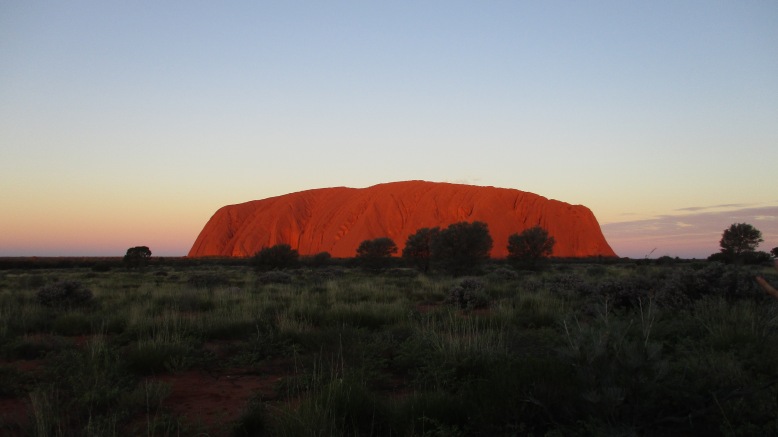 As night fell we moved into our tents for what was a very cold, and noisy night. There is not a lot of power lines out there spanning the desert so each major place seems to have their own source of power in the form of a generator. These run all night long and are quite loud… probably just as well so that we couldn’t hear Dingo’s prowling about, but loud enough to disrupt sleep! We planned to get up early to go to watch sunrise, also along with the hundreds of other tourists, so when it came time to get up and go, no one was complaining too much about the early start.

Sunrise unfortunately wasn’t fantastic, still pretty cool though and I think probably worth watching….cold though very cold! Next on the schedule for the afternoon was a visit to Kata Tjuta, another series of big rocks nearby. Here we ran into another bunch of orienteers/rogainers and went on a walk through the valley of the winds. This was quite a spectacular walk, quite different rocks, and in some ways more interesting than Uluru. We set out on this leisurely walk in the heat of the day, which wasn’t too bad to begin with but in and around the rocks in the sun it got quite hot. Shade was our friend, the sun and the rocky terrain was not. My feet were still quite sore from the Rogaine so it was a bit of a suffer-fest for the most part. I can see why when its over 36 degC the track is closed! It was a little over 20 and I was quite uncomfortable! 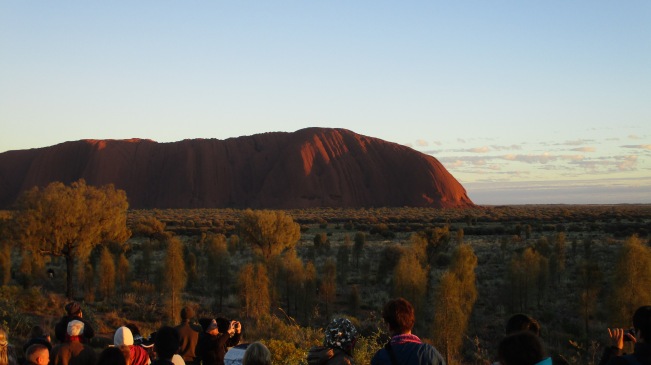 Tim and Michael catching their breath

Valley of the Winds

Valley of the Winds walk

It was a relief to take some shelter, and have some lunch back at the car park. Lunch wasn’t entirely what I would call appetising, it consisted of eating left over food from a combination of traveling and the rogaine! After absolutely cooking in the sun 10mins earlier, I had to move out of the shade because I was starting to get so cold, such was the contrast of the temperature and humidity of the place.

Mid afternoon, and it was time to head back towards Alice Springs in anticipation of our flights home the next morning. Darkness fell not long before we hit the Stuart Highway again, driving in the dark was not recommended in the Northern Territory. This is due to an increased chance of hitting Kangaroos, Camels or other large beasts which seem to roam about the roads at night, however it seemed the scariest  things out there were the Road Trains. Very long and scary things to pass…. 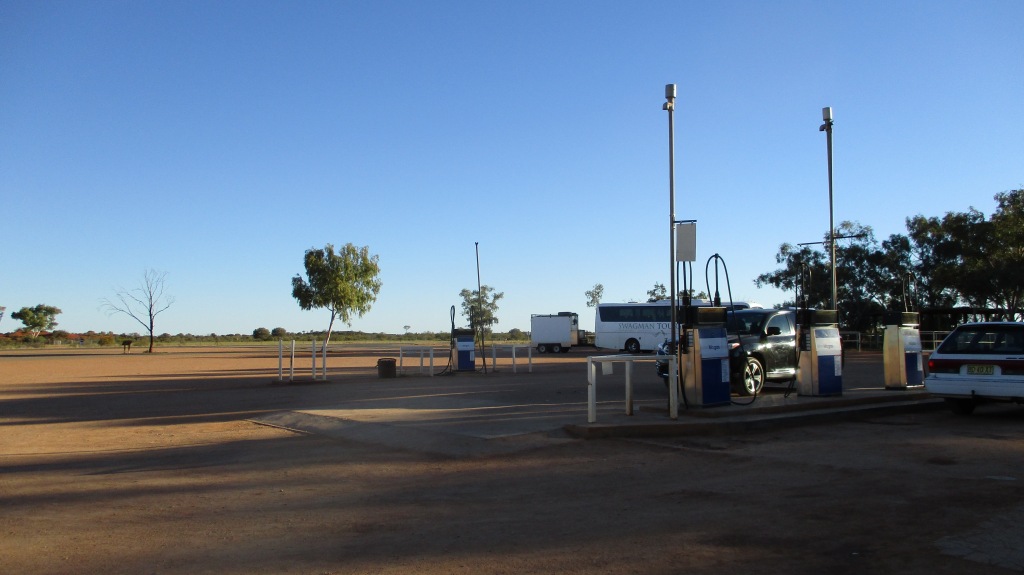 About 80kms from Alice Springs we pulled into Stuarts well for the highlight of the trip: Camping out an Outback Roadside stop. We took the free option, a dusty red paddock, right near the generator… the dust was not ideal for tent pegs either, a slight issue for tents that require pegs to help them stay up!  All of us were fairly tired from our big 7km walk and travelling in general, so the noise of the generator and some distant dingo howling didn’t stop most of us sleeping for the first few hours. Then around 3am a confused roster started crowing, the full moon came out, and it got much much colder. I think we all felt it was a relief when the alarms went off for another early start. Georgia and I had earlier flights than the others which forced us to get up and go early, but everyone was happy to be back in the warm car and out of there as soon as possible.

Camping in the desert, one of the highlights of the trip!

There was plenty of time to do some serious repacking at the airport, ensuring the tent and other gear was soil and plant free, before making an epic serious of flights, taking all day, first to Adelaide, then Brisbane and finally home to Christchurch.