The time had come, after a moderately frantic day of packing and preparation, we were on the road to the Ross River Resort to collect our race information and finally the maps so we could plan our route. Just like everyone else we had the maps in our hands with 3 hours of planning ahead of us followed by the race start at 12pm.

First of the map was huge, we knew it was going to be big but at around A1 (8xA4!) we started to wonder if we really needed a survival blanket as well! Managing the map on the go was going to be tough. We only had a rough idea of what the terrain was like so we decided on a realtively conservative route, covering around 85km, straightline, between controls and water stops. Water stops during the first day were going to be essential to our success as Tim seems to operate on a lot of water, and in the middle of winter in the desert it was only going to be a comfortable 20-odd degrees with minimal relative humidity… Our plan took us through the upper Spinifex area during the afternoon, then covering the eastern side of the map at night, finishing with a short jaunt into the southern Spinifex belt, with a number options on the way home to the Hash house depending on how things were going. 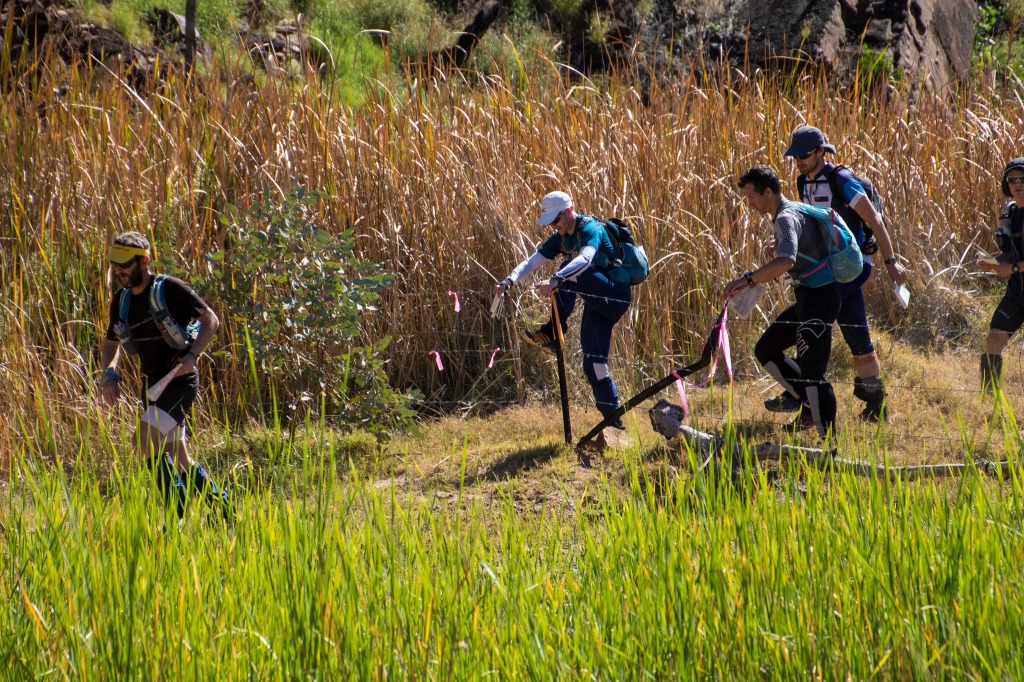 Somehow the three hours of planning evaporated and we were lining up on the start line ready for 24 hours in the desert. 700+ people were with us on the start-line as we got underway, which was not as manic as I thought it would be! Quickly we had to make a decision whether or not to get our feet wet. I made the decision for us and chose to keep them dry. I think it was probably a good choice in hindsight as wet feet in the dry desert is more than likely a recipe for some good blisters. It was pretty much instantly hot as soon as we were running, and with a heavy pack full of food and water I felt like I was suffering from quite early on. I had been eating pretty solidly all morning and I don’t think my food had enough time to settle down, either that or it was nerves.

First control down and the rush was still on, with teams racing around all over the place. Eventually once we were heading up hill I was able to take the lead on the Navigation for a brief moment leading us into the second one in the lead of our little group. Tim then managed to get stung by what he thought was a bee. Fortunately it wasn’t anything too serious and after just over 30mins into the race we were at our first water stop. I had one bottle to fill up, but I was unsure how much water I had in my hydration bladder and on advice from Tim, decided (unwisely) not to fill up.

The next two hours I managed to settle down and get into the race. We entered the first spinifex patch which turned out to be much worse than the model and lived up to everything we had been told about it! I was grateful for my goretex shoes and my gaiters that stopped the majority of the spikes. I slowly began to run out of water, Tim on the other

hand still had quite a bit, enough to lend me until at least the next waterstop. However the Spinifex had slowed us down enough that we were starting to slow down a bit and slip on our schedule. As the sun began to lower we decided to make our first modification to the course, dropping or swapping a 100 pointer to get to the Waterstop faster! In the two hours since running out of water, Tim had also run out and at the hottest part of the afternoon too. It was desperate times in the last hour of daylight rationing a tiny amount of water, just enough to allow us to traipse into the All night cafe and waterstop right on darkness.

Water (and electrolyte) had never tasted so good. I drank probably close to a litre straight away, then filling my pack with approximately 3.6L before leaving. By now it was dark and after having some water and a quick snack from the all night cafe it was like a whole new race. I focused on drinking for the next hour as we collected a few controls before hitting the next water stop. Over that hour I had managed to drink another 1.6L and set myself up for the long night ahead.

Being close to the tropics and the middle of winter there was something like 13hours of darkness. Because of the quality of the map, navigating in the dark was quite simple as long as you kept in contact. Tim pulled off a couple of slick maneuvers in this section, insisting that going straight up and down the spurs was the best method of getting across the terrain. I think it was because of his Hoka’s (Shoes with a lot of cushioning, not very tolerant for sidling). I slipped into a bit of down spot there for a while and I wasnt very good at backing Tim up, allowing a mistake or two to slip in… We continued on however, still racking up a good number of controls.

There was no midnight party, just me and Tim and a couple of Jetplanes in a riverbed in the top corner of the map at the 12 hour mark. We were still on target with our plan, still following it closely, but we chose to drop a 110 point control to avoid a significant amount of climb, and when for a road/riverbed bash. I was not happy here, my feet started to hurt, it was the witching hour and I was not having fun running/walking without having to navigate.

The water stop was quite welcome, Tim had given up trying to force me to eat, and I had got onto my own eating schedule, which made me feel much better. I still had a lot of water in my pack so only filled up my bottle to Tim’s disgust, but by now I was starting to feel the weight of my pack was affecting my speed. The long flatish legs were numbing my mind, and I was in need of some inspiration, nothing really came, until we made a bit of a mistake by just not being confident in where we were. After a pitstop, we were both back in the game.

Dawn finally came and the long night came to an end. Another milestone passed and a little closer to the finish. Here we managed to catch up with Phil and Rob, which was possibly the highlight of the race, and ran with them for a while. Once at the control we went our separate ways as we decided to drop a 90 pointer to ensure we were going to traverse the map fast enough to get back in time. The way we had planned our course, we had left the most significant climb to the last bit, which was not kind on our feet. I hindsight I think I probably should have had more electrolyte to drink at this point as I slipped back into a bad patch. Poor Tim had to deal with me complaining, me worrying that we were not going to get back on time and navigate while ensuring we were still scoring at a decent rate. He made sure we stuck to the plan and carried my pack for a bit too.

The next few hours the heat started to build again, and my feet (and brain) began to struggle. Until we had made it into the Southern Spinifex belt I was still worried we were not going to get back in time. But sure enough we were going to make it back in time, in fact with time to spare. I was completely hating life going down this horrible dry and hot valley, and struggled to run/walk/jog to the water stop. I told Tim at this water stop there was no way I could make it up to the 60 pointer near the end. But after getting some electrolyte down me, and Tim taking my pack I reluctantly accepted the challenge from Tim to go and get the 60 points. I even managed to run.

Yet again we defied my predictions and had plenty of time to get back. Unfortunately by this point we were now out of range of any easy points. After the drink stop I had found a second wind, and maybe the finishline fever/thought of being able to stop had grown ever closer, and I could take my pack back and managed even a sprint to the finish, to race Rob and Phil right to the end! 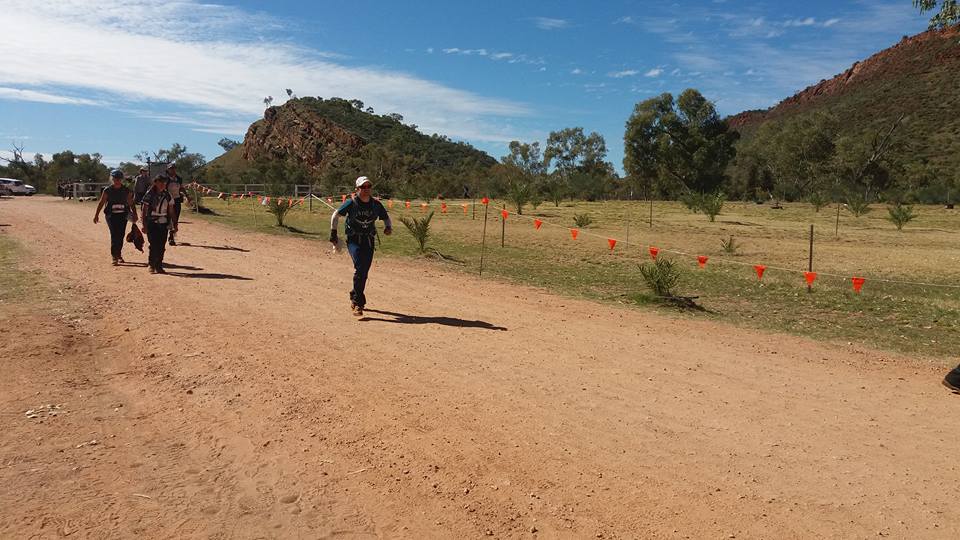 Sprint to the finish

We finished well, Tim did a fantastic job of holding our race together when I was suffering big time out there, but we stuck to our guns and completed most of our planned route. I felt bad for sucking so much out there, but I guess in a team of two someone is always going to be feeling better than the other one, and this time it happened to be Tim for a change! To finish 5th was fairly satisfying, unfortunately we were only 50 points of 4th place over all and 1 place of making the Open mens grade podium.

Once again huge thanks to Bivouac/Outdoor for your help and support and in getting me prepared for the race!